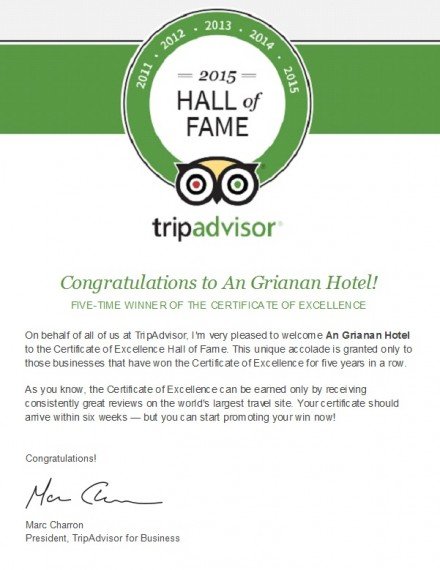 The superb An Grianán Hotel in Burt has been awarded for its dedication in providing top-class customer excellence in the hospitality sector by being inducted into the TRIP ADVISOR HALL OF FAME.

Travel giants TRIP ADVISOR are world renowned and getting recognition from them is no mean feat, but management were overwhelmed when they learned that they had been inducted in the hall of fame for excellence.

Marketing manager Ron Kerrigan said, “We are extremely proud to announce that we have been included in the Trip Advisor Certificate of Excellence Hall of Fame.

“We have won the individual Award for the last 5 years in a Row and hence have been given Hall of Fame status.

“Every one at the Hotel is thrilled to gain yet another Award and are very pleased to welcome a prosperous many years to come.

Not content with that, An Grianán Hotel were then also awarded with a prestigious award from the Derry-Londonderry Chamber of Commerce.

Ron added, ” We’d also like to take this opportunity to mention how proud and happy we are to have received such a Prestigious Award from the Derry~Londonderry Chamber of Commerce.

“Staff at the Hotel are thrilled to have won this award as it shows recognition for the hard work and determination put in to not only promote the Hotel but all things great about Inishowen’s heritage and Culture also.

AN GRIANÁN HOTEL INCLUDED IN THE TRIP ADVISOR HALL OF FAME FOR EXCELLENCE was last modified: June 16th, 2015 by Stephen Maguire