DONEGAL SOLSTICE WITH A SANDWICH AND A SONG! 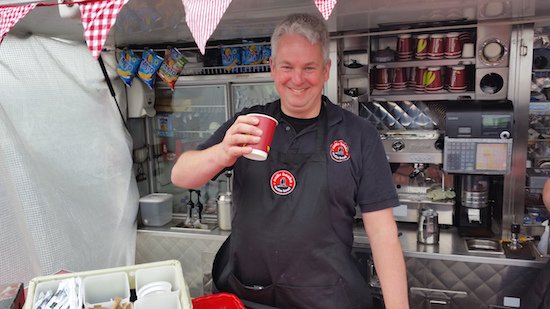 Dominic McDermott getting ready to celebrate Solstice this Sunday

Fancy marking this Sunday – the longest day of the year – at Ireland’s most northerly point?

Well if you don’t mind the early rise, enjoy a cup of coffee and a bacon sandwich, then Bamba’s Crown at the tip of Malin Head is the place to be!

And it’s all thanks to the entrepreneurial spirit of an English chap and his Belfast born better half.

Dominic McDermott and his wife Andrea operate Ireland most northerly bakery and coffee shop from their home base at Ireland’s most northerly town land, Ballyhillion.

They have two mobile coffee shops and from Easter to September their little ‘three wheel baby van’ climbs the hill to Bamba’s Crown where you can treat yourself to delicious fresh Barista coffee, home baked cakes, pastries etc while enjoying the breath taking scenery.

Throughout the year there’s a good chance you could meet their ‘grown up van’ at markets, festivals, work places, beaches, shows, weddings etc around Inishowen.

This van was custom built for them with a large oven and fridge as well as a Fracino Espresso machine allowing them to bring delicious hot and cold sandwiches and wraps, pies, soups, stews, chilli as well as their fantastic coffee and baking to places other café’s can’t reach

The couple decided three years ago that they would like to mark the Solstice by doing something different.

“So at Solstice time we decided to come up to Bamba’s Crown at 2.30pm, throw on a barbecue and about 50 people turned up and we thought this was great,” said Dominic.

He added: “We did it again last year and about 90 turned up so this year we’ve decided to go for it once more. I know there’s a big event on at the Grianán of Aileach but we just wanted something low key and simple where people could just come, sit on the rocks, have a cup of coffee and a bacon sandwich and watch the sun come up.

The sun rises around 4.40am on Sunday, June 21 but if you make it to Malin Head, Dominic and Andrea will be waiting for you from about 3am onwards.

“As far as we’re concerned this is now an annual event. This is a really magical place to watch the sun rise and the view is just astounding,” he said

Local resident and one of those campaigning for a top quality tourist facility for the area, Ali Farren said they saw the potential Malin Head had to become a major attraction but needed all agencies to get behind the idea and develop it properly.

“We have a fabulous history here but it’s our future that’s more important. I reckon the figure of 200,000 visitors a year is conservative because there’s not a day goes by but you meet someone here. We need the infrastructure and the facilities,” he said.

Ali and friends will be holding a musical session at Bamba’s Crown on Solstice evening.

“Malin Head has seven minutes more sunlight than anywhere else in Ireland because of our location so what better way to end this special day than in the company of musicians from near and far as the sun goes down. They do it everywhere else in the world, why not here,” he said.