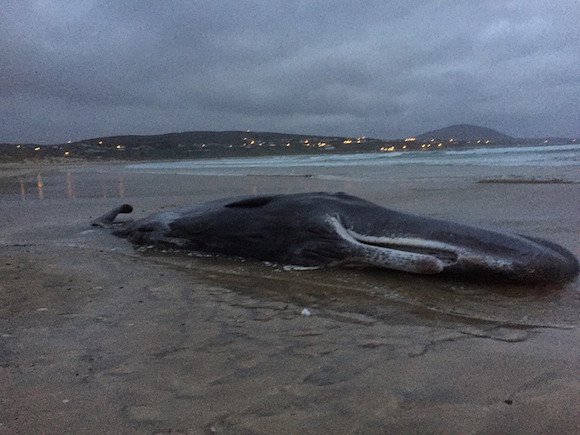 DEAD WHALE CAUSING A STINK AGAIN – AFTER IT WAS BURIED ON BEACH!

The huge sperm whale which has reemerged on Magheraroarty beach.

A 45-ft sperm whale has been washed ashore on a Co Donegal beach AGAIN – after it was buried by Donegal County Council!

The massive creature was initially washed up on Magheraroarty beach on Friday last.

A decision was made to bury the whale under the sand where it was washed up.

However stunned locals have now discovered the creature has washed up again and is causing a stink.

One local told Donegal Daily that the smell from the decaying creature is very strong.

“As you can imagine it was sad enough that the creature was washed up the first time. In fairness to the council they acted quickly and the whale was buried.

“But it obviously wasn’t buried correctly as it was washed back out and emerged back on the same beach again.

“It’s causing a lot of bother on the beach as there is a foul smell coming from it now that it is starting to decay rapidly,” he said.

The council have yet again been informed of the presence of the whale and are expected to take action to dispose of the creature today.

It’s the latest beaching of a whale on our shores.

Although very sad, it’s not unusual – and scientists still can’t agree as to why it happens.

DEAD WHALE CAUSING A STINK AGAIN – AFTER IT WAS BURIED ON BEACH! was last modified: June 22nd, 2015 by Stephen Maguire
Facebook0Tweet0LinkedIn0Print0
Tags:
bachdonegalMagherarortywhale