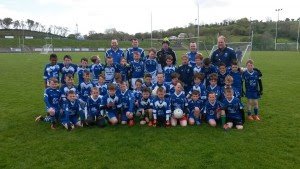 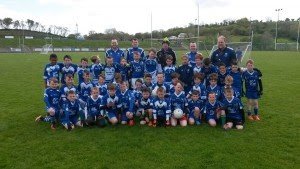 Annual subscriptions for the lotto (€100) should be made on or before June 29th to be entered into the end of year draw for prizes totaling €1,500. The draw will take place on Monday June 29th in the Abbey Hotel at 9pm. All members welcome to attend.

The numbers drawn were 15, 17, 18 & 24 with the jackpot now standing at €1,400. New members are still welcome so why not play online now at www.fourmastersgaa.com

The 2015 coaching academy for 4-7 year olds boys and girls continues this Saturday morning (11am to 12:30pm) in Tir Conaill Park with great numbers attending each week. Thanks goes to all the coaches, volunteers, parents, and players that help out each week. All parents and children are asked to be in Tir Conaill for 10:45pm so coaching can start on time. Well done to the U8 boys from the academy who playted in the U8 blitz on Saturday morning. New children and parents are always welcome to attend. Anyone that can help out at the academy any week should make contact with Pauric Harvey (0860523905) or Laurence Doherty (0877532705). Helpers are required each week for the car park, tea room, collecting money, coaching, setting up and clearing up afterwards.

Four Masters U8s hosted a blitz at Tir Conaill Park on Saturday morning. Aodh Ruadh and Dungloe were the other teams. All Clubs had two teams taking part in the blitz.
There was some great skills of Gaelic football from all teams.
Four Masters Tigers and Four Masters Cubs done really well in all their games. They showed great skills of tackling, blocking , passing with both hand and foot. There was some good points scored also. All the young boys really enjoyed the games. Thanks to both Aodh Ruadh & Dungloe for attending the blitz.
Thanks to all coaches who helped out James Cullen,Greg Doherty,Geoffery mc Gonagle,James Lenihan and Michael Masterson.Thanks also to the tea ladies Sinead Higgins and Sarah Mc Hugh who feed all kids and parents.
8 and U10 Hurling

The Four Masters U10 and U8 hurlers travelled to the Convoy Centre of Excellence on Sunday morning the 21st June. All players gave a fantastic account of themselves showing off and further developing their vast array of skills. There was a lovely mixture of solid ground hurling along with pick-ups, catching, soloing and striking from the hand, not to mention the essential blocking and hooking. The boys have been training hard and it showed in all games. In the u10s Liam Quinn, Dylan Cleary, Colm McDermott, Cian Regan along with Niall Feeney all enjoyed time in goals. They all made some vital saves and clearances while Niall Feeney even scored a goal from his own goal line.Colm McDermott and Liam Quinn, in defence, both cleared well while under pressure, Liam with some lovely pick-ups and Colm striking on the ground. Cian Regan was always in good position to deal with any potential threats and made some great clearances. Daniel Quinn proved a handful in the forward line scoring some fine goals proving unstoppable while running at the various defences. Kevin Muldoon gave a fantastic contribution with some dogged tackling, determination and fine long-range scores. John Flannery yielded a great return with two goals from two games. John Bell tackled and harried throughout while Cillian Sweeney and Kian O’Donnell were super up front. Tiarnan McBride proved a revelation on the day seeing lots of the ball and was in the middle of all the action. Over all a great day for the players with closely contested matches against Setanta, Aodh Ruadh, Letterkenny Gaels, Dungloe and St. Eunans. The blitzes are a fantastic forum for all the players developing their hurling skills. With each game, they learn and improve. The blitzes will continue throughout the summer and new players are always welcome, contact Lorcan O’Toole 087 135 45 64, for further information.

Our under 10 boys were in action last weekend with two teams travelling to Dungloe to play the hosts and Killybegs. Both teams excelled in their performances with some excellent team play on show helping them to win the four games they took part in. We sent a third team to play in Na Rossa to take on the home team, Naomh Ultan and Kilcar. Again the boys competed very well in their games and all enjoyed the day. Thanks to both host clubs for their hospitality, to the parents who transported the boys and especially the boys themselves who were up early for the journey and played their hearts out.

The final games of the Kevin Faulkner memorial cup for under 10 boys and girls were played on Wednesday evening. Played over two weeks, nearly seventy children split into six teams played each other in some very competitive and highly skillful games. In the end two teams, Dublin managed by Emmet Gallagher and mayo, managed by Mick kilcoyne ended up with eight points each to reach the final. These two teams played earlier in the evening with Mayo been spurred on by Calum Mc Crea and Daniel Mc Intyre, winning the game by a single point.

However the final was a different matter. From early on it was clear that Dublin really meant business and with David Monaghan keeping the defense in tact, Conor Meehan dominating midfield and Rian Carr and Holly Roarty getting the scores up front there was only going to be one winner.Having said that mayo battled all the way to the end with Oisin Doherty getting the last score of the game blasting a penalty past keeper Calum Dunnion to give them some consolation. .Alas it was another oh so nearly story for Mayo and manager Mick Kilcoyne. The final was played in a great spirit and although Dublin and manager emmet celebrated like they had won the All Ireland everyone shook hands and were still best of friends afterwards. Killian on behalf of the faulkner family presented the winners and runners up with their medals before handing over the Kevin Faulkner Memorial Cup to winning captain Conor Meehan.

All in all it was a great end to a very entertaining evenings football.
Big thanks to the Faulkner family for their continued support,to the refs Paddy, Mick, Ronan, Pauric and Lee Jordan who did the final, to Sinead and Bernie and everyone who helped with the refreshments and party bags,the parents for their support and finally the children themselves who put in such an effort in all the games they played.

Training will continue throughout the summer on Wednesday evenings 6.15 to 7.30 pm with blitzes on intermittent Saturdays. 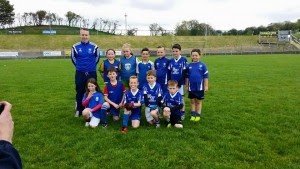 The U12 boys football team continued their winning streak on Friday night against Dungloe in Tir Conaill Park. The boys also defeated Killybegs last Wednesday in Fintra. The lads now play Aodh Ruadh on Wednesday night in Ballyshannon at 6:30pm. The B team lost out to Dungloe on Friday night. Well done to U12 player Lee Murchan who came 5th out of forty players the Donegal U12 Football skills competition.

Malin deservedly recorded their first win of 2015 in Tir Conaill Park against a below par Four Masters team. Malin raced in a two point lead in the opening minutes with two excellent Anthony Kelly free kicks from long distance. Four Masters responded with Michael Doherty hitting two free kicks to level the game up. Stephen McLaughlin playing in the full forward line hit an excellent team score for Malin before Shane Carr replied with a lovely score near the right hand sideline. Stephen McLaughlin hit another point from play before another Anthony Kelly free kick put Malin two points up. A blocked down Darren Doherty shot landed in the square to Leo McHugh who beat the Malin goalkeeper to the high ball and finished to the net. That score left the half time score line: Four Masters 1-03 Malin 0-05.
Dillion Ward opened the scoring in the second half with an excellent long range point from over forty metres. Malin then took over in the next fifteen minutes, hitting five points without reply with Anthony Kelly deadly from the free kicks. Four Masters responded with a late Darren Doherty point. Malin were well served by returning Donegal player Declan Walsh, Stephen McLaughlin who finished with two points, Anthony Kelly who hit eight free kicks, and Charlie Bryne with Barry Dunnion, Barry Monaghan, and Dylan Kennedy the best for Four Masters on the day.

The reserves men’s football team lost out by two points (1-05 to 010) to Malin on Sunday. The lads will rue a couple of missed goal chances in each half with Malin finishing well. Best performers on the day for the reserves were Ryan O’Donnell, Jason Daignean, and Benny Cassidy.

Good luck to Paul Durcan, Karl Lacey, and Dylan Kennedy are involved with the Donegal teams that play Derry on Saturday evening in Clones. Well done to Kate Keaney who helped Donegal Ladies to a comprehensive victory over Down on Saturday. Well done to the Donegal U21 ladies team who won the U21 B All Irealnd title on Sunday.

The 21st Annual Four Masters G.A.A. Club / Frank Muldoon Memorial Golf Competition will take place at Murvagh Golf Club on Saturday 11th July an open Singles Stableford Competition. Four Masters Club Chairman Eamonn Gorrell welcomed everyone to the launch especially Rory Gallagher Donegal Senior Football Manager, Karl Lacey Donegal Senior Footballer, Kevin Kearns Manager Centra / Rooney’s who are the main sponsor’s of the event. Eamonn stated “we are looking forward to this fundraiser and a very good day’s golf and social event on Saturday 11th July and hopefully existing members and past members of the club will take part on the day.” He thanked Murvagh Golf Club for their assistance on staging this event again and Centra / Rooney’s for their sponsorship. Presentation’s this year will take place on the Saturday evening 11th July in Dom’s Pier One. Calling all members past and present to support this Golf memorial event. Contact club members Paul Timoney 087‐2791305 or Kieran Mullin 087‐2141293

Applications for the Dermot Early Youth leadership are now open until July 5th. This initiative aims to teach young GAA players several new skills in a fun environment. Four Masters and Aodh Ruadh are only two clubs to host this initiative in Donegal. Any TY students in the AVS this September would be ideal candidates for this programme. It involves a number of workshops, practical experience and a trip to Croke Park.

To apply see below;