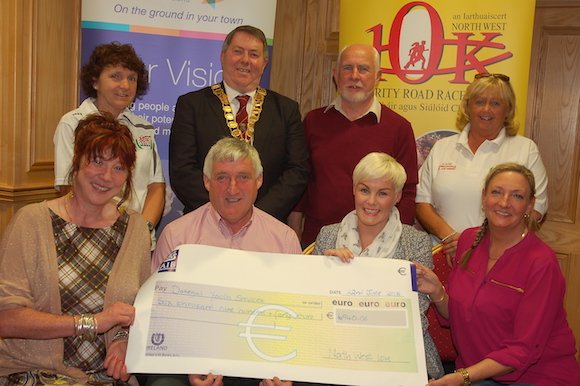 Despite stiff competition from the upsurge in athletic fundraising events the 19th North West Run and Walk has raised €27,760 for four charities.
The cheques were handed over to Down Syndrome Association, MS Ireland Donegal Branch, the Donegal Youth Service and Blood Bike North West last night in the Mount Errigal Hotel.
In his address Chairperson James Boyle said that this year’s event had once again been a big success.
For the first time there were four benefitting charities who each received €6,940.
Mr Boyle praised the work of the Gardai, Irish Red Cross and all the stewards who had ensured that the 2,000 walkers and runners got through the event safely which is the number objective of the organizing committee especially with such large numbers now taking part.
The invaluable support of sponsors DonegalDaily.com and Brian McCormick Sports & Leisure and was also acknowledged while the backing provided by Letterkenny Chamber was described as key to the success of an event that will be celebrating its 20th birthday in 2016.
Among the special guests at the cheque presentations was the new Mayor of the Letterkenny Municipal District Cllr Gerry McMonagle.