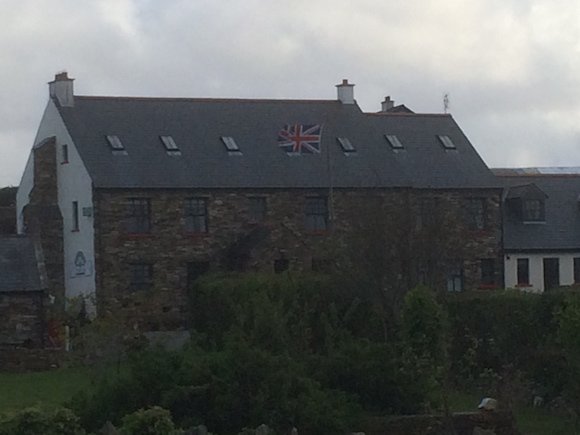 The union flag flies above Corncreggan Hostel in Dunfanaghy three weeks ago. Pic by 100% Pictures.

The management at a leading Donegal hotel has defended their decision to fly the Union Flag on two days last weekend in the village of Dunfanaghy.
Derek Arnold said the decision to fly the Union Flag at Arnold’s Hotel was in keeping with their policy to provide a welcome for all their guests without offending any sector of the community.
He said their decision to fly the flag came after much consultation with expert opinion and they did not make the decision lightly.
He told the Tirconail Tribune “We consulted expert data on flags and the protocol for how they are flown. We are satisfied that the international flags protocol had been observed and I am at a loss to know what the controversy is all about,” he stated.
Mr. Arnold was commenting after a complaint was made to the hotel on Sunday evening by local media commentator, James Woods.
This is the second time this summer that controversy has reared up around the flying of flags in Dunfanaghy.
And again on both occasions the case has been made by Brendan Rohan and more recently by Derek Arnold that they had chosen the Union Flag rather than the Union Jack to avoid any notion of conflict or offence to the public.
Mr. Arnold said his family had a very proud history of hospitality and hotel ownership in Dunfanaghy and now in a new era of peace and reconciliation he said they recognised the place of all flags and all nationalities who visit Dunfanaghy on a regular basis. He said this week the Union Flag has been replaced by the Stars and Stripes because they have many American guests staying in the hotel.
James Woods has challenged this saying both flags are the same and nobody can provide information to the contrary to support having them flown in Dunfanaghy or anywhere else in this State.
He said that the matter needs much more clarification since the Union Flag and the Union Jack are the self-same and have the exact same political and Royal dimensions. Mr. Woods lodged a complaint with the hotel reception and has followed up his objections to the flag by writing a letter to the media. He is a regular contributor to local media on a wide ranging suite of topics including politics, religion and social issues.
In his letter to the Tribune this week, Mr. Woods said that as he drove through Dunfanaghy on Sunday evening what caught is eye was the big Union Jack flag hanging on the front of Arnold’s Hotel
He said: “ I made my way inside to make the hotel aware of my objection to the flag being flown, as I found it offensive considering how it has and is being used to stoke sectarian tensions no more than an hour’s drive away in the lead up to the marching season. I waited my turn to speak to express my complaint and was told the hotel had British visitors and that is why it was being flown.
Why don’t you fly the St George’s Cross if it’s for English visitors? Well there are Scottish and Welsh among them. Doesn’t Scotland have a flag of its own as does Wales? Why not fly them as they do not have the same connotations attached to them?” he said.
In response he said he was told the hotel flies the Irish flag: the EU, Canadian, French and South African flags as well.
Mr. Woods said he did not have any problem with that as none of those countries have ever invaded or done us any harm?
He added: “I have many English friends who understand completely why the Union Jack is such a sore point historically to Irish passport holders. I have had our flag the Tricolor ripped from my hands and threatened with jail by English police at a protest march in support of innocent Irish prisoners languishing for years in English jails on trumped up charges? (Guildford four/Birmingham six etc).
“I would appreciate a reply from the management/owners explaining the rationale behind this unwarranted act, especially now as there are new weekly revelations of collusion between British security forces and loyalist death squads in our country,’ he added.