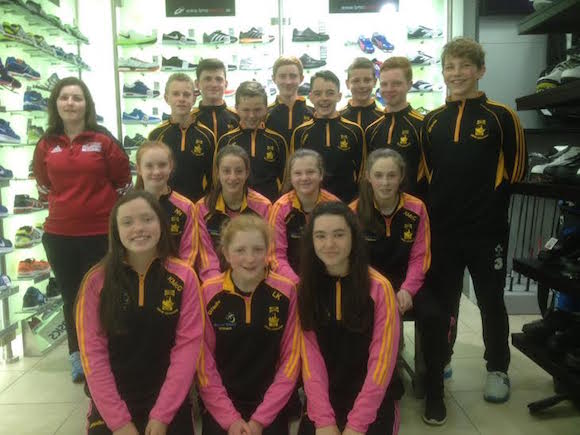 ST EUNAN’S girls and boys U14 teams head to the South East tomorrow – to represent Donegal in the Féile Peil Na nÓg.

The girls team claimed the 2014 Donegal U13 A Championship title when they defeated Moville in the final last November.

They have progressed to the semi-finals of this year’s U14 A Championship after defeating Glenfin on Tuesday evening.

Team managers Marty McCarron and Eunan Walsh along with mentors Elaine McGovern and Breda Kelly had the very difficult task of whittling the squad down to 24 players for Féile and will hopeful the girls will give a good account of themselves as they travel Baltinglass in Wicklow as the recent run of championship matches will have the girls in good stead for the test that lies ahead where they will face opposition from their hosts as well as Naomh Eoin, Carlow and Oliver Plunketts / Eoghan Ruadh, Dublin in Division 2.

The team is backboned by several members of the Donegal U14 panel that has reached the All-Ireland B Final that is set for July 4th and is managed by St Eunan’s coach Greg Harkin, who managed the club side to that U13 title last year.

Baltinglass are probably Wicklow’s best known club enjoying great success at Senior level having won 9 out of 10 championships between 1985 and 1994 that included an 8-in-a-row (they have won 21 to date) and in 1990 they claimed the ultimate prize of the All-Ireland Senior Club Championship.

Their most famous players are Wicklow’s only ever All-Star Kevin O’Brien (now the club Coaching Officer) and Hugh Kenny who now manages their boys U14 Féile team.

In recent years they have won several underage titles in both boys and girls football and are the reigning County Senior Ladies Football Champions.

St Eunan’s U14 boys football squad qualified for the National Finals of Féile by winning their Donegal U13 Co. A Championship (2014).

Indeed this side has enjoyed considerable success in recent years winning the Go Games Donegal finals with both their teams in 2013.

The side contains six dual players who recently helped the U14 Eunan’s hurling team clinch a national title.

The team is managed by Joe Higgins, John Ellison and Pauric Daly and will be based in the South Wicklow area of Tinahely and will compete against teams from Gusserane, Wexford; Ardboe, Tyrone and Tinahely, Wicklow in the group stages.

Quarter finals in both the Féile Cup and Shield are in Wexford Town on the Saturday and all involved are aware of the challenge involved in reaching this stage. The National semi-finals and finals are pencilled in for Sunday at the Wicklow Centre of Excellence.

So the Feile Peil na nÓg weekend be a challenging test for all concerned given the logistics and travel between venues and the quality of the opposition. Team manager Joe Higgins points to the goal of the team coaches in encouraging each member of the squad to continually work on improving their skills so that they progress through the club’s established coaching structures.

St. Eunan’s will be hoping that last week’s successes on the Camogie and Hurling fields will inspire the footballers this weekend in the sunny south-east. Six of the girls football team played in that Camogie success.

Some of the players of both teams are pictured at Brian McCormick Sports in Letterkenny with their new club colours ahead of their trip tomorrow.