ULSTER MFC: AGONY FOR DONEGAL MINORS AS THEY BOW OUT AFTER LATE, LATE PENALTY MISS

GAA: Donegal have bowed out of the Ulster MFC after late, late drama in Clones. 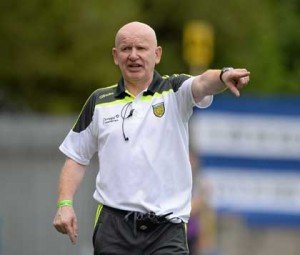 Donegal were trailing by two points deep into injury-time and looked like they were heading towards the exit door.

However, Ethan O’Donnell was awarded a penalty and Donegal were provided with an opportunity to book their place into the Ulster final.

Kilcar’s Conor Doherty stepped up but unfortunately he blazed his penalty over the bar.

From the resultant kick out the referee blew his full-time whistle.

Declan Bonner’s side were raging hot favourites but in truth they never really turned up this afternoon and they will be bitterly disappointed to exit the competition especially after being given the opportunity with the penalty late on.

Donegal reached the All-Ireland final  last year but many pundits believed this current minor crop was a better side and expected them to go all the way.

However, the dream is over and Donegal are heartbreakingly out of the entire All-Ireland race.

Glass and Patrick Kiernan dominated the middle sector and that gave them a platform to launch attacks.

Donegal were improved after the break but just couldn’t peg Derry back.

It was cruel that Conor Doherty who is a top class performer didn’t score the penalty.

But Doherty should take solace from the fact it can happen the very best.

Michael Murphy missed his penalty in the All-Ireland U21 final in 2010 and look what he went on and achieved.

Hard luck to Declan Bonner and his entire backroom team and squad.

You’ve done us ALL proud over the last few years.