TG4 TO UNVEIL DELIGHTS OF DONEGAL IN SUMMER SERIES FEILTE

On Sunday, July 5th, new presenter Máire Treasa Ní Dhubhghaill is in Donegal to explore the wealth of cultural visitor attractions, adventure activities, artisan food, music and song in the north of the county – and she discovers some of the secret gems in the towns and villages along the route, as well as some truly breath-taking scenery.

Each episode will highlight a different Discovery Point along the route of the Wild Atlantic Way, starting from Fanad Point in north Donegal, where Ciaran McElwaine introduces us to Fanad Head Lighthouse. Now automated, it first shone its light on St Patrick’s Day 1817, and has been the subject of many stunning photographs and paintings over the years. Across the turbulent waters of the Northern Atlantic, you can capture a view of Tory Island more than 14 km out to sea.

Also on the Fanad Peninsula, Máire Treasa drops in on Dill’s farm to view their historic native breed of Dexter cattle, which are grass fed and are reared employing enhanced traditional farming methods. Dill’s Dexter Beef is sold in local outlets and at their farm shop in Letterkenny.

Máire Treasa tries her hand at paddle boarding with Luke Daly of Adventure One at Rathmullan Beach, before visiting The Singing Pub, Downings. Here, local musicians Caoimhe Ní Mhaoileoin, Sarah Cullen and Adhamhnán Ó Gallchóir entertain us with the best of traditional Irish music, and Francie Conway and Paddy Cullen sing for us. 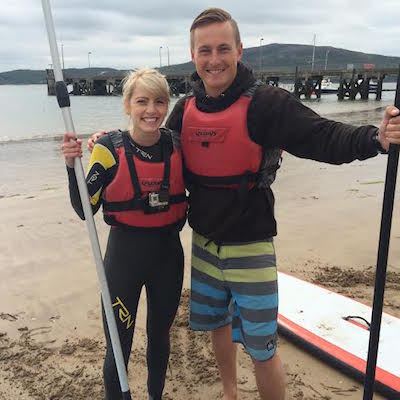 Luke Daly shows TG4 how to paddle board.

We also meet with Bríd Uí Mhaolchiaráin, a Bean an Tí with summer college Coláiste Bhun an Inbhir in North West Donegal, and she chats to us about her summers spent looking after young people, many from the six counties, who have come to Donegal to learn Irish.
Máire Treasa and all the crew look forward to bringing the Wild Atlantic Way to you! And each week, there’s an exciting competition for viewers to have their own chance to sample its delights – with fantastic getaway breaks for friends and families.
You can see Féilte on TG4 on Sundays at 8.30pm, and online at HYPERLINK “http://www.tg4.ie” www.tg4.ie
The series kicks off on July 5th, with this first visit to the beautiful county of Donegal.