Residents in Convoy have welcomed the installation of a crash barrier on the outskirts of the village. 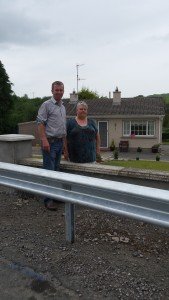 It follows a year-long campaign to have the barrier erected ended this week after contractors carried out the work on Monday.

Councillor Liam Doherty said he is delighted by the news.

“Following an accident last July involving a car, the barrier here at McElwain’s Corner just outside of Convoy was badly damaged and eventually removed.”

“This was of course very concerning for local residents in the area as the barrier was originally erected to not only protect drivers but also those living nearby as the section of road is on a very dangerous bend.”

“Following the accident last year I decided to raise a motion at a Municipal District meeting of Donegal County Council at which I called on the Council to support the immediate replacement of the structure.”

“Thankfully, my motion was passed and the Council agreed to pay for a new barrier which was installed on Monday by Contractors.”

“Obviously this is very welcome news for those living nearby who have been extremely anxious to have the barrier replaced as quickly as possible.”

“Those living near the site feared for the safety of their children while playing out in the garden or around the house because of the increased risk created without the crash-barrier protecting their property.”

“However, while it may have taken longer than I would have liked, I am certainly glad that this matter has now been resolved and that local people now have greater peace of mind.”