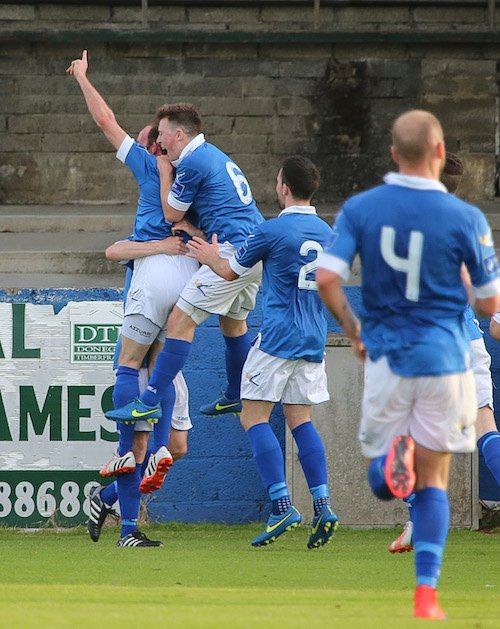 SCORING SCREAMERS FOR FUN-STON – HARPS WIN THANKS TO MICKEY!

Funston is surrounded by his team-mates after scoring his latest screamer! Pic by Northwest Newspix.

Mickey Funston is making a habit of scoring screamers.

His goal was the difference at Finn Park as Harps got back to winning ways after a three game losing streak.

Funston has scored some vital and impressive goals this season, namely against Waterford and Cobh Ramblers.

But his goal again the Dublin outfit tonight was perhaps his most important and best this season.

Funston picked up possession from Gareth Harkin and cut inside. It appeared that Funston had little on but another pass. But when he let fly from 40 yards, not even Cabinteely goalkeeper Evan Whelan could have guessed he was having a pop.

The Harps supporters erupted into a frenzy as the ball nestled in the back of the visitors net to make it 1-0.

Harps were the better side but but Ger Pender could have drew things level on the half hour when h chipped Ciaran Gallagher only for his shot to come back off the crossbar.

Damien McNulty had another chance for Harps while Cabinteely sub Karl Byrne should have scored for his team.

Funston could’ve made it 2-0 with only 16 minutes left when he headed just over from a Tagbo cross.

Harps held on but it was probably a deserved win – thanks in no small to that wonder goal from the boot of a man better known for his tremendous work-rate than sensational winning goals.