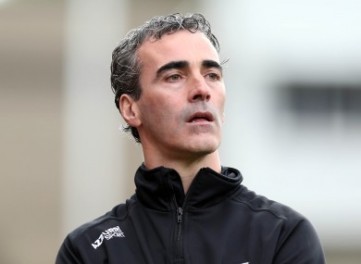 McGUINNESS SAYS MANAGING IN THE PREMIERSHIP WOULD BE A GOOD CAREER MOVE!

Former Donegal GAA boss Jim McGuinness says managing in the Premiership would be a good career-move!

The Glenties man appeared on RTE’s Saturday Night With Miriam show and discussed life after managing his county team.

McGuinness was asked by host Miriam O’Callaghan if he would one day like to manage the likes of Liverpool, Chelsea, Man Utd or Arsenal.

And he admitted that when the wages in the Premiership were taken into account, it would be a “good career move.”

But the transition from Ballybofey to the Barclay’s Premier League may not be as pie-in-the-sky as some may think.

The Donegal All-Ireland winning boss revealed he is starting his soccer coaching badges, will be working directly with the Celtic Under 16 team and is getting one-on-one advice from Celtic’s coaches including John Collins, John Kennedy and Stephen Woods.

“Everyone has been drip-feeding me and that has been very beneficial and I will get the chances to work with the under sixteens this summer,” he said.

He admitted that he didn’t miss managing Donegal as he had moved on but he admits that it was the best five years of his life including the season managing the Donegal U21s.

McGuinness tried to explain his plan for a revamp of the All-Ireland Championship to the RTE host.

However, it appeared that Miriam was a little confused by Jim’s plans to make the championship more inclusive for some of the smaller counties.

McGuinness paid tribute to his wife Yvonne, who was in the audience, and revealed how some of the couple’s five children attend school in a 23 pupil school outside Glenties.

Miriam also remarked what a beautiful place Donegal was and how it must be a wonderful place to bring up children in.