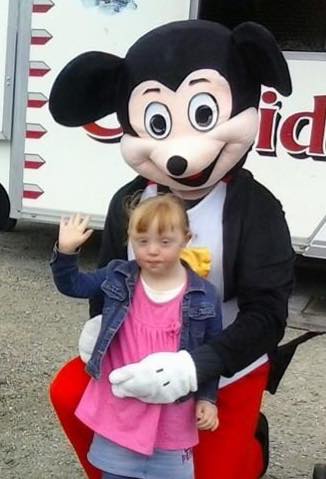 A Donegal mum has said she feels like she has been punched in the stomach after a local centre refused to enrol her on a play-camp because she has Down Syndrome.

However, she was told that she would have to provide an Special Needs Assistant to take part in the summer camp to accompany her daughter.

Amber said this is not the first time this has happened to her.

She also revealed she has received massive support locally from many people.

Amber wrote on her Facebook page “Well I just got that feeling again in my stomach that makes me feel like someone has punched me and there isn’t a thing I can do to fight back.

I feel winded. I made enquires about enrolling Lily on mini summer camp at.

“Yes we have availability ” I was told.

“Then I mentioned two little words “Down Syndrome”.

There was the awkward silence that was for a split second but seems like an eternity (for parents of children that are not labelled “typically developing”)-the here we go again -we are inclusive because the label says so but we don’t really understand what that means.

“I was told by a member of staff (empathy certainly wasn’t in her dictionary at school) that Lily couldn’t enrol for summer camp without a full time Special Needs Assistant with her as she has one at school everyday!

Very sad all Lily wants to do is play with her peers and do all the fun things they do.

She may not colour as fast as the other 4-6 year olds and may have to be asked if she needs the toilet a couple more times than them but to think these little things exclude her from community life ??

“How selfish a society we are becoming because Lily would at times take a little more time and patience . So a) we find the funds for a full time SNA for the week alongside the cost of the camp -lol be cheaper to go to Spain b) she remains segregated from her peers on her summer holidays.

No visible signs saying “no disabled persons” but may as well be.”

A statement released by the Letterkenny Community Centre said thy regretted the situation.

However they stressed that they are a non-profit organisation who simply cannot afford ‘one-to-one’ care for children with special needs on its Livewire Camp.

Letterkenny Community Centre wish to clarify and make absolutely clear that at no time was Lily refused access onto the Livewire Summer Camps.

For the avoidance of doubt, the Centre merely requested that those who attend Summer Camps and who require one to one Supervision, that Supervision must be authorised and provided by the Parent or Guardian in question.

While the Centre in the past was able to finance and subsidise this Supervision it is financially no longer in a position to do so.