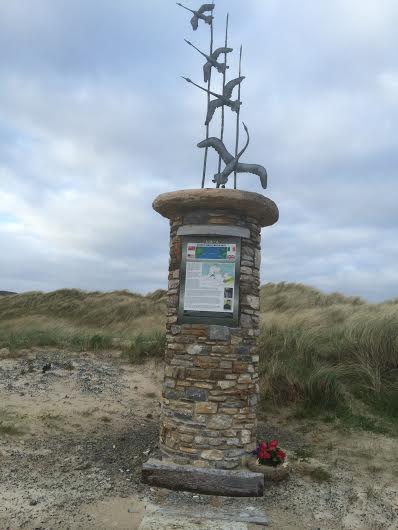 OUTRAGE AS WAR LANDING MEMORIAL ATTACKED BY THUGS WITH HAMMERS

The monument in Dunfanaghy which was attacked by vandals with hammers. Pic by 100% Pix.

Damage to a World War Two monument at Killyhoey beach in Dunfanaghy has led to anger and dismay amongst the community.
The vandals have struck on two occasions in recent weeks with what appears to have been a stonemason’s hammer.
Brendan Rohan who led the memorial project has expressed shock over the damage to the memorial which was unveiled in June last year. 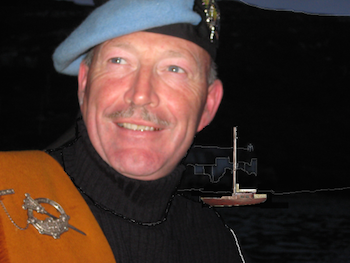 The memorial marks the emergency landing of an Lockheed Hudson bomber with a crew of four after their plane ran out of fuel on June 16th 1942 while on route from Newfoundland to Prestwick.
The memorial has been the subject of vandalism in the past year says locals but the latest damage has been the worst.
And Brendan Rohan says the memorial has been attacked by someone using a stonemason’s hammer.
His name has also been scratched off the plaque and it is suspected a chisel was used to inflict the maximum amount of damage.
He told the Tirconail Tribune: “The damage to my name does not matter to me although it seems to be the reason why some locals are taking it personally.”
“The earlier damage, with a carpenter’s hammer, was to both flags only, in the second week of June and was more superficial and only obvious on close inspection.”
The Blue Flag beach at Killyhoey is close the local golf club and 1.5 kilometres from Dunfanaghy.
It is a quiet location with no houses close by and it is an easy target for vandals. The impressive memorial stands several feet tall and is visited by visitors from many nationalities.
The WWW2 aircraft had made the epic 2115miles journey from Newfoundland in 1942 and while a long way off-course made a successful landing at Killyhoey. Some days earlier a similar aircraft made a landing on Pollan Strand, Ballyliffin.
These planes were part of Lockheed’s famous Hudson patrol bombers and the crew escaped unscathed. And it was only last year when the event was commemorated some 42 years to the day of the event happening on the 16th June 1942.
Ramona Dzinkowski, a daughter of one of the crew made the trip to Dunfanaghy for the occasion and she was joined by other military personnel from Britain, Canada, Ireland and the United States.  Local school children who had been part of the project to trace people who had seen the plane when it was landed were also there.
The memorial theme with the The Children of Lir was adapted by Mr Rohan to represent a 20th century shape-shifting, after an original design and by kind permission of Dublin silversmith, Aidan Breen, which was then interpreted and constructed by local artist and blacksmith, Harry Rice.
It is meant to symbolise the four brave young men who travelled such a long and perilous journey over the seas, who dropped in for a short visit and then flew away again next day. This monument also honours the Irish Defence Forces and Irish government who ignored the Rules of Neutrality, to help those in need and … it honours the generosity, kindness and hospitality of local people who welcomed and assisted them.