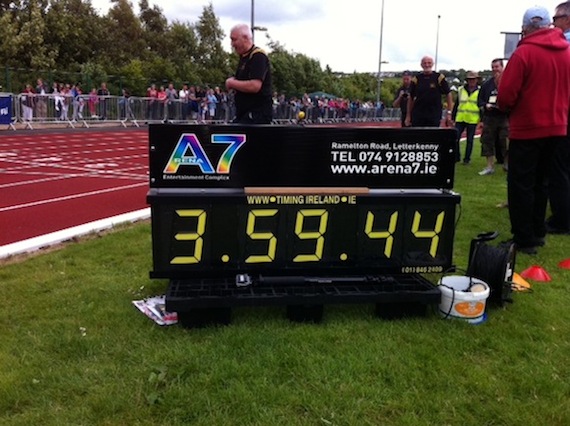 An attempt to record a Sub-4 Minute Mile for the second year running in Letterkenny just failed tonight.
American John Peterson came agonisingly close to making his mark when he clocked a time of 4.00.07 at the Danny McDaid Track at the Aura Leisure Centre.
The event may not have attracted a huge crowd but there was some terrific performances on the night.
Three Irish female athletes achieved the 3,000m steeplechase qualifying time for the 2016 Olympic Games.
Kerry O’Flaherty (Newcastle AC, 9:42.61), Michelle Finn (Leevale AC, 9:43.34) and Sara Treacy (Dunboyne AC, 9:44.15) finished second, third and fourth respectively behind Jamie Cheever of the United States.
South African Lebakeny Sesele set a new track record by winning the 100 metres in 10.36 seconds.
Local athletes who competed at the even included Danny Mooney and Ruairi Finnegan.