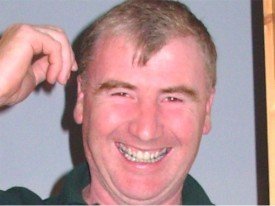 Plans to build a new factory in Co Donegal are in doubt after an objection that employees’ car will damage the local environment and cause pollution.

The owner of the cosmetics factory, which is already located in Kilcar, wants to build a purpose-built factory and double its workforce from five to ten.
But An Taisce have officially objected to the new facility saying it is against the County Development Plan in that it will bring more traffic into such a rural area.
Michael McCloskey, owner of Algaran Teo at Kilcasey in Kilcar, is seeking planning permission to build a seaweed cosmetic factory beside the house where the factory is currently located.
There are five employees at present in the factory, which makes cosmetics from seaweed harvested locally.
The development would increase the use of cars in the area, where there is very limited public transport, and this would be against the County Development Plan, according to An Taisce.
Part of an objection letter from An Taisce to Donegal County Council states “A dependancy   on private travel would give rise to an increase in greenhouse gas emission and would be contrary to policies laid out in the Donegal County Development Plan.”
But Eunan Mac Cuinneagáin, board member of Údarás na Gaeltachta, told RTE’s Raidio na Gaeltachta, that he had reacted with disbelief at the correspondence from An Taisce.
“An Taisce says on its website that it is working on behalf of the community. We all agree that the environment must be protected, but I don’t think this type of thing is helpful. It’s unbelievable.
“What are we going to do, close down all Gaeltacht areas because people are using cars? It’s unbelievable…. Maybe this is a decision made by someone in an office in a city somewhere, where there is public transport to get people to work … but that’s not the case in rural areas. When I heard this first, I thought it was a pretence, that someone was joking and that the story wasn’t true, but then I saw the letter myself this morning … It’s very serious.”
He said he would be raising the matter at a meeting of Údarás na Gaeltachta, and hoped they could impress upon the County Council and An Taisce the importance of allowing developments like this to go ahead.
The Minister for State for the Gaeltacht, Joe McHugh TD, said small rural communities had to be sustained, and that jobs were badly needed in areas such as Kilcar.
He said that is was the government’s job to ensure that and that he would be raising the issue with the Department. 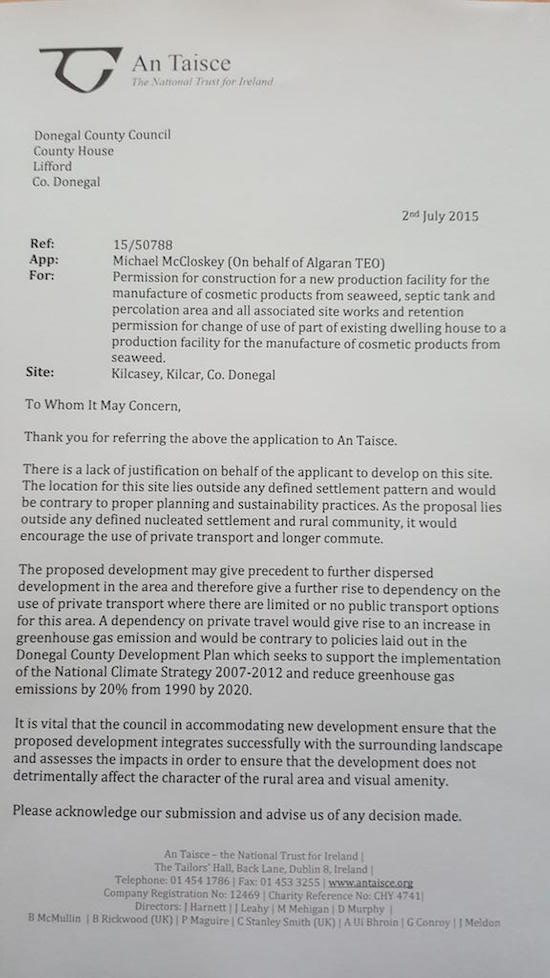 The letter from An Taisce to Donegal County Council.