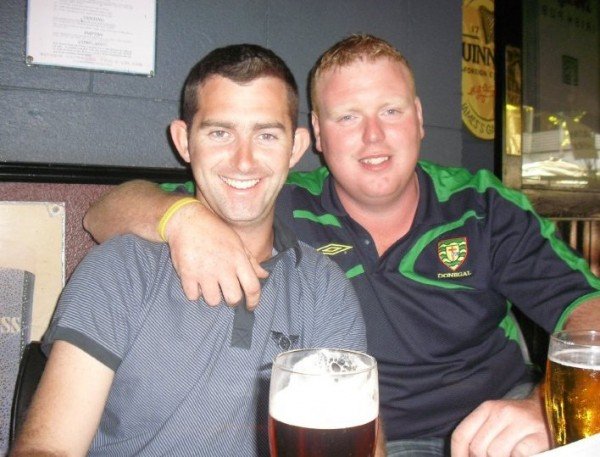 FROM CAMDEN TOWN TO CLONES – ‘HOW I WISH I WAS THERE’

A Donegal GAA fanatic has passionately penned a moving message about today’s Ulster SFC final between Donegal and Monaghan.

Declan Boyle sent a poignant message to Donegal Daily earlier today expressing his anguish at being unable to watch the eagerly anticipated clash between Donegal and Monaghan.

Boyle, a native of Dungloe – has followed Donegal all his life – through the good times and the bad.

However, like many young Donegal men, Declan has been forced to emigrate in search of employment.

He has found good, steady work in the tunnel industry in London but his heart yearns for home.

Boyle would love to be in Clones today, but circumstances have dictated that he will follow all the Ulster SFC final action from his mobile phone as he works in London’s Camden Town.

However, Boyle says that while he may ache at the fact he can’t be in Clones to see Murphy and McBrearty run a muck – he takes pride in the fact that Donegal have become such a powerhouse that they’re now looking for their FOURTH Ulster title in just FIVE years.

Declan sent us the following message that should make us appreciate the fact we’re able to go and hopefully witness Michael Murphy lift the Anglo Celt for the FOURTH time in just FIVE years.

“It’s 6am, it’s time for work, I enjoy my work and I like London – although today my heart is elsewhere.

“The weekend shift is never nice, but it’s worse today, I can’t help thinking about home.

“Most of my friends are waking up today with a mighty hangover, but they don’t care, they’re heading for Clones.

“I can picture the excitement, I can visualise the colour.

“I can see Clones, I can see the crowd walking up that steep hill – talking about how the game will pan out.

“Will Murphy start inside, is McBrearty fit, will McGee be fit to handle McManus.

“I can picture it all, and I wish I was there to offer my insight, to feel a part of it, but I’m not, I’m in Camden Town.

“I’ll go to work today, but my head and heart will be in Clones, I was lucky enough to be at home to see Donegal destroy Armagh in the Athletic Grounds, but how I wish I was in Clones today with the rest of them.

“My English colleagues won’t care too much about the outcome, and my Irish workmates are into hurling, but I’ll be checking the phone frantically hoping and praying that as Jim would say ‘We get over the line’.

“Regardless of the result – Donegal have given me so much pride and win, lose or draw tomorrow I’ll be proud of each and everyone of the Donegal team.

“But when I clock off tomorrow in Camden Town, I will go to the local, and I’ll have a pint – and I hope I’m toasting another Ulster success.

I’ll be in Camden Town, a far cry from Clones, but I’ll be proud, and I’ll be smiling – and I’ll toast the heroes of Tir Chonaill regardless of the result.

“For those in Clones, cheer the lads on, be our voice.

I’ll be in a tunnel in London, but with every message telling me about the game my chest will burst with pride.

“Take her home Rory, and have a good night in the Abbey, I’ll catch up with you in September, I’ve the week booked off!

FROM CAMDEN TOWN TO CLONES – ‘HOW I WISH I WAS THERE’ was last modified: July 19th, 2015 by Stephen Maguire
Tags:
donegalGAAnewsSportUlster SFC