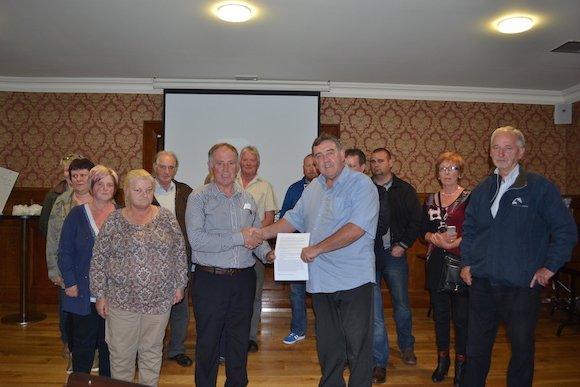 The historic meting and agreement on water meters in Inishowen is agreed.

An agreement between MBC Builders (Gildea), Ballybofey and Inishowen groups opposed to water meters has been reached following a groundbreaking meeting.
The meeting came about as a result of John Gildea, MBC Builders, recently contacting James Quigley, a local anti water charge campaigner from Buncrana.
MBC Builders is one of two subcontractors contracted by GMC Sierra Ltd to install meter ready boundary boxes in place of old water stopcocks in the area.
GMC Sierra Ltd have the main contract from Irish Water to install water meters throughout the north/north west of Ireland from Mayo to Donegal.
At the meeting John Gildea of MBC Builders agreed that no work will be carried out on properties in Inishowen which have a sign up, indicating that they do not want a meter.
The Inishowen groups agreed that they will not oppose MBC Builders working on properties which don’t have a sign up. The agreement is subject to the following conditions;
1 MBC Builders will not work on properties who have a sign up indicating that they do not want a water meter installed..
2 MBC Builders personnel will not try to coax or by any mean persuade any residents who does not want a meter or who has a sign up indicating so, to change their minds .
3 MBC Builders will notify an anti water charge campaigner at least the night before work starts in any particular area.
4 All work will be carried out within socially accepted times 7.30am-7.30pm Mon-Fri and 8am to 1pm Sat.
James Quigley emphasised that this agreement is between us and MBC Builders. It is all about ‘signs’ on properties whose owners do not want a meter. If people have a sign up they will not get a meter or boundary box. There are some complicated technical issues in respect of work carried out by sub contractors and that carried out by GMC Sierra Ltd. We will be clarifying these issues later in our web page, the media and public meetings. We will also clarify other important issues that came up including the possibility that another contractor may come in after MBC Builders and finish the job or that this agreement paves the way for contractors to complete their job in Inishowen.
For some time now campaign groups in the area have been calling for a sensible approach such as this to the water meter controversy.
Mr Quigley said “We have repeatedly contacted Irish Water, GMC Sierra and An Garda Siochána to try to set up such an agreement. As far back as February we had a very successful public meeting in Buncrana where campaigners from Moneymore, Drogheda gave a talk on their successful agreement between themselves and contractors. I believe everyone in the packed audience that night were in agreement that we should go down this route.
“I am glad we persisted and I am pleased that John Gildea of MBC Builders finally sees that an agreement such as this is the sensible way forward. This is an agreement that satisfies the needs of both sides. It is based on mutual trust and has already been proven in Moneymore and Cork and other parts Donegal that it can be a civilised solution to a difficult problem. All protest groups and Inishowen people should now get behind this new dispensation, give it a fair chance and demonstrate to one and all what can be achieved by reasoned negotiation.”