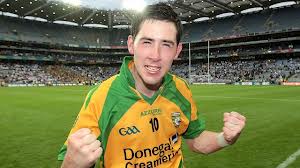 ULSTER SENIOR FOOTBALL FINAL TALE OF THE TAPE: HOW THE TEAMS WILL LINE OUT

Mark McHugh lines out for Donegal in final against Monaghan

DONEGAL manager Rory Gallagher has made one change for today’s Ulster Senior Football Championship final against Monaghan in Clones (thrown in 2 pm).

Mark McHugh comes in for Martin O’Reilly making a double day for the McHugh family with Ryan also lining out for Donegal.

But his dad and television pundit Martin McHugh is not backing the Dun na nGall men.

He has just predicted a Monaghan win!!

ULSTER SENIOR FOOTBALL FINAL TALE OF THE TAPE: HOW THE TEAMS WILL LINE OUT was last modified: July 19th, 2015 by John2