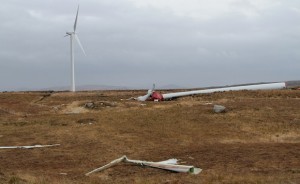 Turbines are a waste of money, says expert

ONE OF Europe’s leading energy specialists has told the MacGill Summer School in Glenties that building more wind turbines around Ireland is ‘madness’.

Dr Tony White, who has 35 years experience in international power markets and the low carbon economy was in Glenties this afternoon.

Ireland aims to generate 40pc of all its electricity by 2020 from renewable sources, and Dr White says we are going about this the wrong way by following an ‘all wind’ approach.

He says: “Attainment of the 40pc target will require another 200 wind farms, 700km of new transmission line and hundreds of new towers to carry these lines. These transmission reinforcements alone will cost up to €3.9bn, according to Eirgrid.”

Dr White argues the same targets could be reached for one tenth of the cost by converting Moneypoint power station in Co Clare to biomass.

He says this option would not just save billions of euros but would not put at risk Ireland’s world famous tourism and bloodstock industries.

“We wouldn’t need to pepper the countryside with industrial scale wind turbines and transmission towers,” he says.

Some of these turbines are 169 metres in height – almost three times taller that the Liberty Hall building in Dublin. Or one sixth the height of Ireland’s tallest mountain, Carrantuohill.

And biomass will impose lower costs on consumers, something to be welcomed in a country with very high electricity prices.

He says: “Customers are already suffering from amongst the highest power prices in Europe and it is surely madness to carry on and build yet more wind when there is a cheaper alternative.”

Dr Tony White is a director of BW Energy, was lead analyst for the top ranked energy team at investment bank, James Capel, which advised the UK Government on privatising the power sector.

As Head of Citigroup’s pan-European power team, he oversaw market liberalisation in other European markets. He was the UK National Grid’s Group Head of Strategy in the 1990s.

Sustainable biomass is made from branches, tops of trees and other low grade product that is often left to rot, as well as sawdust and chips.