FERGUS TO REVEAL ALL ABOUT LIFE IN ‘THE MENTAL’…..AND OTHER THINGS!

The launch of ‘In a World Apart’, Fergus Cleary’s autobiography will take place in the Regional Cultural Centre, Letterkenny on next Wednesday 29th July at 7.30pm. 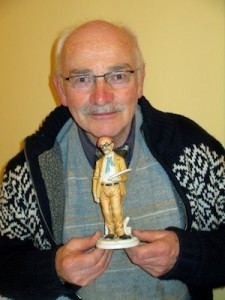 It’s a trip down memory lane with Fergus as he recalls the many and varied chapters of a very fulfilling life through his work at St. Conal’s Hospital, his showband days and huge amount of charity work that he has done.

“It’s includes my memories of working in St. Conal’s. There’s plenty of stories about the place some humorous, some sad” said Fergus who started work on the book just a year ago.

It runs to 120 pages and also includes tales from his time in the showbands and his marathon charity lorry runs with supplies to the poor and deprived in Romania.

Some years ago Fergus presented a couple of ‘one man plays’ about life in St. Conal’s Hospital and excerpts from that production will also feature in the book.

“I hadn’t given serious thought to writing the book although over the years many people were saying that I should do so with all stories I had about the hospital, the showbands and the trips to Romania. So last August I just though it was time that I started on it” Fergus said.

Comedian Conal Gallen will be one of the special guests at the launch of ‘In a World Apart’ in the Regional Cultural Centre, Letterkenny on next Wednesday evening at 7.30pm.

Fergus will also be appearing with the book at the Base Centre, Railway Road, Stranorlar on next Thursday 30th at 7.30 where he will joined by another well known comedian Aussie Bryson. The book will be on sale on the night and in outlets throughout the county.

* Editor’s note – ‘The Mental’ was the name given to St Conal’s Hospital by local people at the time. No offence is intended.

FERGUS TO REVEAL ALL ABOUT LIFE IN ‘THE MENTAL’…..AND OTHER THINGS! was last modified: July 23rd, 2015 by Stephen Maguire
Tags:
A World ApartdonegalFergus Clearyletterkenny