RIGHT2WATER DONEGAL DEFENDS USE OF ‘THAT BANNER’ 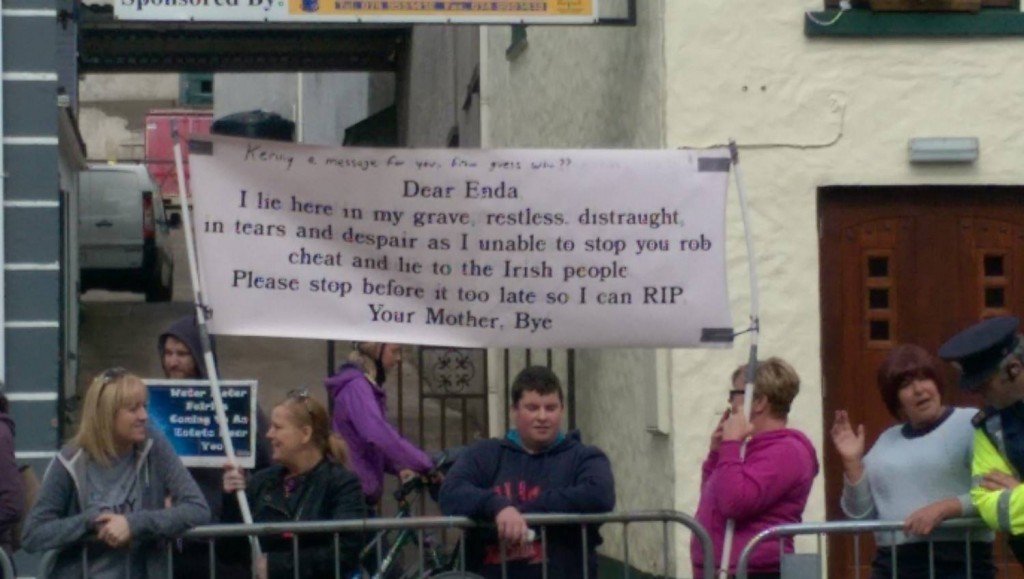 The banner which caused much offence.

Enda Kenny’s visit to the Mc Gill Summer School brought with it much media attention, not least his remarks about a Sinn Fein/Independents coalition being a freak show.

However, it was the protest outside the Highlands Hotel that brought the most controversy.

A certain banner was singled out for special attention by the National media.

Right2Water chairperson Charlie Mc Dyer explained “this banner has been around for quite some time and while I don’t condone the message it displays, it is not within our powers to patrol every banner or placard that people bring to protests”.

The banner, claiming to be a message from Mr Kennys deceased mother has caused a furore on social media with people divided in their opinions about it.

Ms Mc Dyer continued “we live in a democracy where free speech is allowed, I find it rather ironic that people are so outraged; when inside the Highlands Hotel where Enda Kenny gave his speech, people were not allowed to ask him their own questions. His speech was scripted, as usual, and there were set questions which were not to be deviated from – where is the free speech in that instance?”

The outrage that the banner has garnered may well be justified but Charlie questioned whether the banner really is so bad.

“When the Government took medical cards away from special needs children where was the outrage? The Health Service is at crisis point with people lying on trollies for days….where is the outrage? When the Government cut lone parents payments where was the outrage? The list goes on and on. The absolute contempt that Enda Kennys coalition has shown to the people of Ireland is outrageous. We protest because we want him to see that it is the ordinary people who are suffering while the Government protects the very people that caused the financial crisis in the first place. As Enda Kenny said himself ‘this is about more than water'”.