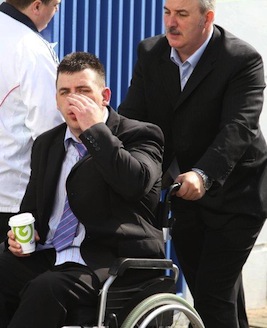 A Co Donegal country and western singer who uses a wheelchair faces jail if he does not complete his community service sentence or get a medical report as to why he cannot do it. 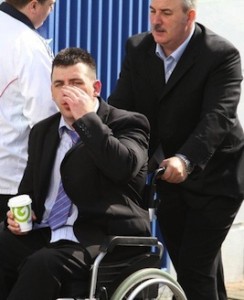 Daniel Coyle, was jailed for four years and disqualified from driving for 20 years after pleading guilty to dangerous driving causing the death of his cousin Hugh Donegan in 2009.

However his jail term was substituted for 240 hours community service by Judge John O’Hagan following a case at Letterkenny Circuit Court in 2012.

But Coyle, 31, was brought before Judge O’Hagan again today after the probation services revealed that Coyle, of Clar, Redcastle, had completed just 20 hours of the 240 hours community service.

Probation officer Ms Yvonne Lennox told the court that her office had given Coyle numerous offers of ways to complete the community service but many had not been taken up.

He had been offered the chance to take part in a pro-social drivers course in which he could speak about dangerous driving to other participants but this was not taken up.

It was also arranged for him to sing for old folks at the Buncrana Day Care centre, and although this was taken up on two occasions, he failed to meet other appointments.

Mr Coyle had told Ms Lennox that he had recorded a CD for charity and the probation services were willing to give him some hours off his community service in lieu of this.

However no evidence of any CD has ever been given to the probation services, she added.

Barrister for the state, Ms Patricia McLoughlin, said the probation services were “at their wits end” trying to get Coyle to complete the community service.

But Coyle had claimed that he was simply too unwell to meet the requirements of the community service sentence.

Judge O’Hagan said he was disturbed by the situation and said it looked like Coyle simply wanted to walk away from what he described as “this dreadful situation.”

He said he was prepared to give Coyle one more chance to come up with options or solutions as to how the remainder of the community service could be completed or a medical report as to why he is not fit to complete it.

He adjourned the case until January 26th next adding that the case could be re-entered if there is any difficulty with Coyle in between.