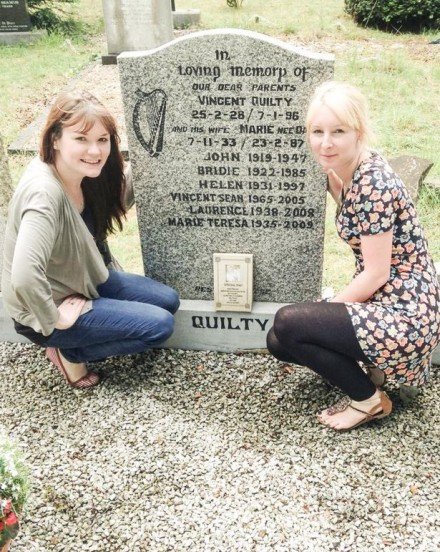 A Donegal man threatened with legal action from debt collectors was unable to pay what he owed creditors because he was DEAD!

Laurence Quilty hailed from the beautiful costal town of Redcastle – but he sadly passed away in 2008.

However, the fact Laurence was deceased didn’t stop lawyers representing a debt collectors from sending him a letter to his address in Redcastle almost seven years after his death!

In the letter they threatened Mr Quilty with legal action and said debt collectors planned to obtain a court order to force him to sell his house.

His daughter Clare-Louise Quilty penned a hilarious response to the their letter.

She wrote, ““Unfortunately my father is no longer contactable at the address in Redcastle, Co. Donegal, as he has actually been residing in Dunboyne Cemetery since January 2008.

“Attached is a photo of me visiting him at his most recent residence just last week.

“I don’t think he’ll be moving elsewhere in the foreseeable future so please feel free to forward any further correspondence there, although I’m not too sure of the quality of his penmanship these days so please be patient when awaiting your response.”

Clare-Louise Quilty, who now resides in England concluded by saying, “If you have any further questions, please feel free to contact me.

“I expect a rapid response as you have obviously been hot on the case of this issue – sometime in the last decade at least!