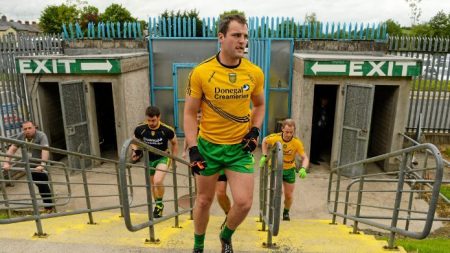 DURCAN AND MURPHY NAMED IN THE GAA.IE TEAM OF THE YEAR (SO FAR)

DONEGAL’S Paul Durcan and Michael Murphy have been named on the Team of the Year (So Far) by gaa.ie, the game’s official website.

Those behind the verdict admit season teams are picked at the end of they year – but with that in mind they have come up with their ‘Football Team of the Season So Far’.

“It should hopefully start a debate on who will be in contention for All Stars at the end of the season,” says the site.

Here’s what they say about picking captain Murphy and keeper Durcan.

There are reports that Durcan is considering a move to Dubai in 2016, and if that is the case, Donegal will be deprived of one of their top assets. While he probably should have done better with Lee Keegan’s looping shot towards goal in Saturday’s All-Ireland quarter-final, this has been another excellent season for the Four Masters man. He only conceded three goals in the whole summer, and kept clean sheets against Armagh, Derry, Monaghan and Galway. He made vital saves at vital times, and as usual, his kick-outs were out of the top drawer. May not get the All Star, but he has been the best goalkeeper so far this summer.

What more can you say about Michael Murphy? Arguably the defining Gaelic footballer of the last five years, Murphy was by a distance Donegal’s best player again in 2015, leading them gallantly in six gruelling matches. Murphy’s awesome ability leads to his deployment all over the field for Donegal, and sometimes his selfless work for the cause limits his scope for individual expression. Yet he still manages to hit the heights time and time again. He was immense in the win over Armagh, kicking some outrageous long-range frees, while his towering performance against Derry included a couple of absolute belters from open play. He was subdued in the Ulster final, but when he was switched to full-forward against Galway, he was involved in two golden moments – the first, a wonderful individual point, and the second a brilliant flick to set up Ryan McHugh’s goal. In Saturday’s defeat to Mayo, he never let up and finished with eight points, three from play, despite carrying an injury into the game. Donegal have probably been knocked out too early for Murphy to win another All Star, but he was brilliant this summer.

DURCAN AND MURPHY NAMED IN THE GAA.IE TEAM OF THE YEAR (SO FAR) was last modified: August 15th, 2015 by John2