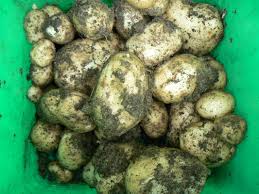 You can both show off a bit and create a crop of considerable value by growing your own new potatoes for Christmas.

A nice crop can be easily achieved by growing a small amount in a pot, large bag or a bed.

Take some seed from some of the early potatoes you’ve been harvesting, replant some tubers into a compost filled pot, bag or into freshly cultivated ground (6inches deep) – adding a handful of chicken pellets to the m2, then water thoroughly and leave the pot/bag in a sunny location in the garden. The potato will quickly launch into growth and in a few short weeks you’ll see the new shoots breaking through the surface.

This lush fresh growth will be susceptible to late blight, so as they grow apply a routine anti-blight spray every fortnight during the later part of the summer , you will also need to protect the foliage from frost, so as the nights get cooler start covering the foliage over with fleece, or bring the pots/bags into the greenhouse or polytunnel to protect them.

Don’t forget about watering, especially if you’re growing these in pots. Potatoes are thirsty plants and the number 1 reason why folks get small potatoes at harvest, is not enough water! So don’t be scared to give the bags a good drink (by a good drink I’m meaning 2 gallons a day when they are fully grown).

When they flower remove these flowers by hand, these flowers serve no purpose other than to be pollinated by wind and produce a inedible fruit, by removing these you refocus any energy back into the storage roots (aka the potatoes). This might seem a little tedious, but it could improve your yield by 10%….use the appearance of the flowers as an indicator to start boosting your crop with a weekly feed of tomato food or comfry fertiliser. 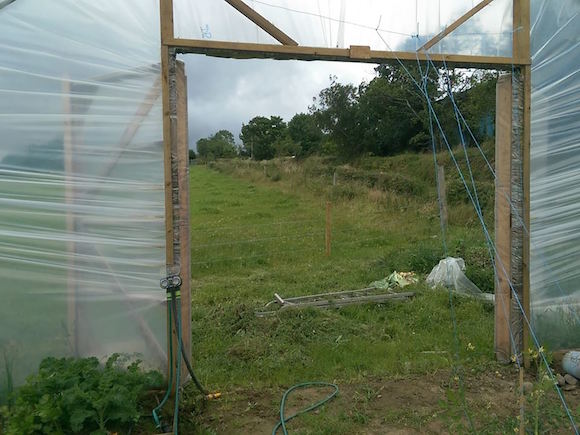 Talking of Polytunnels, ventilation is critical as we work through August, a good steady supply of fresh air entering the tunnel is vital in controlling disease, pushing growth and assisting in pollination. As plants grow they take in carbon dioxide and they omit oxygen, so if the plants don’t get enough carbon dioxide the rate of growth decreases. The simply act of keeping the doors open on a tunnel allows carbon dioxide to enter the tunnel, and with this flow in and out it also dramatically reduces fungal diseases such as Botrytis.

So get the doors (and vents) opened all day every day, a great way to ‘heat’ the soil during the evening is to place full bottles of water amongst your plants. The water heats up during the day and then releases some heat back into the soil as it cools during the evening.

Sheep love poking their heads through the fence to get to the fresh bite the other side, and in the process can leave clumps of wool behind, and this my friend is great stuff for detracting slugs away from your plants. The sheeps wool is very wirey and oily and slugs hate the feeling of it. So next time your out walking take a plastic bag and pick some wool from the fences, take it home and then place it around your susceptible plants, such as your Hostas. 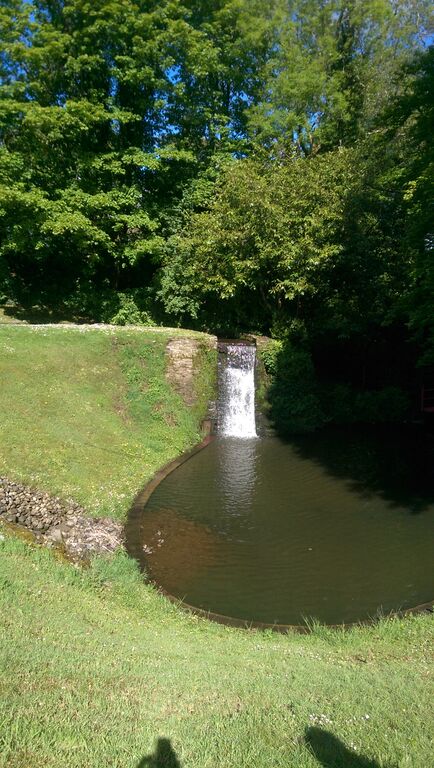 One of the many features in the Beech Hill Landscape

Our garden of focus this week is the grounds of the Beech Hill Hotel, located in Ardmore just outside Derry City. The Beech Hill, was originally called Skipton Hall (first house built 1622 on the site), and has a fabulous designed landscape comprising waterfalls, bridges, a lime tree avenue, a ‘wilderness walk’ and large sways of Snowdrops in early Spring (much of this dates from the late 18th century).

The landscape around the big house has changed dramatically over the years, with perhaps the greatest influence being the creation of Europe Base 1 by the US army in the second world war, within the BeechHill hotel there is a wonderful display of photos and images of this period.

In the grounds of the hotel there are a number of walks (3 odd miles worth), which tell the story of both the designed landscape but also of the marines time there, with Nissen huts and names carved into trees giving a snapshot into our recent history. Within the grounds there are (as you’d expect by the name) some fabulous Beech Trees, many 200+ years old and there is a wonderful Oak tree which is around the 400 year old mark too. The Lime Avenue at the front of the house is a wonderful feature, which in the spring is covered in Snowdrops then Bluebells. 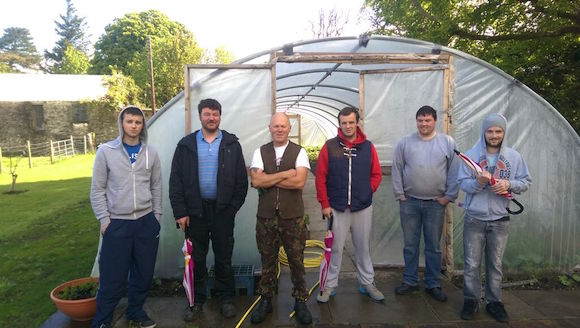 The walled garden is going through a wonderful renaissance, with hotel proprietor Patsy O’Kane taking a keen interest in the redevelopment of this area to a highly productive kitchen garden, under the care of Head Gardener Robert Peaker. Robert currently has around 1/5 of the garden under production with a couple of polytunnels, a glasshouse and lots of outdoor beds. The stone work within the walled garden is wonderful to see, with the south side being curved in both corners to catch as much light as possible.

The walled gardens and grounds of the Beech Hill Hotel are open to the public 7 days a week, and families are encouraged to explore the 32 acres of woodland which surround the award winning hotel. The path network is excellent for buggies and stollers, although some of the smaller side paths have some steep drops to keep an eye on the toddlers! Details can be found on beech-hill.com

Next Week….Sowing Shamrocks for St Patricks Day and growing plants that slug DON’T like!… 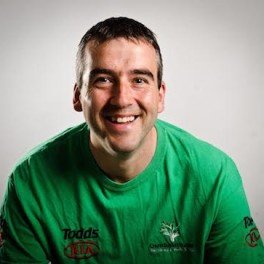 Gareth Austin is resident Horticulturist with BBC Radio Foyle, a member of the Chartered Institute of Horticulturists and Horticultural Lecturer with the National Learning Network. For more see www.garethaustin.com or join Gareth on Twitter @GardenerGareth .