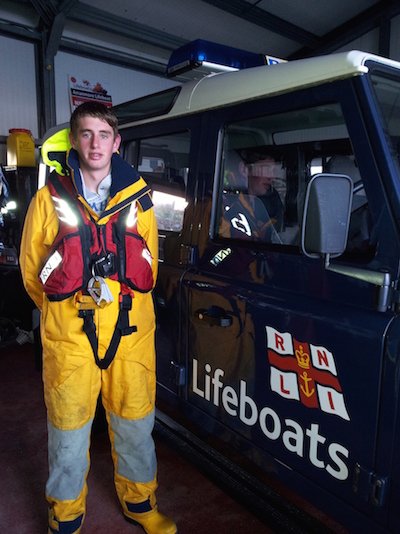 A young Donegal lifeboat volunteer is to have the honour of opening the RNLI’s new All-Weather Lifeboat Centre in Dorset in England.

The honour of officially opening the centre will fall on the shoulders of the two youngest fully qualified all-weather volunteer lifeboat crew in the Institution.

One of these is 18-year old Arranmore RNLI volunteer crew member John McDermid.

John has been a crew member with Arranmore RNLI since he turned seventeen in 2014 and recently received his Leaving Certificate results. He is shortly due to start an apprenticeship in marine fitting.

John will be joined in opening the new facility in Poole by fellow lifeboat volunteer crew member Caryl Jones form Porthdinallaen in Wales.

Both John and Caryl will ring a bell eight times in line with maritime tradition as the doors rise and the All-Weather Lifeboat Centre is declared officially open. This tradition will be repeated at the launch of every new all-weather lifeboat.

RNLI Chief Executive Paul Boissier will address the gathering and Phil Coulter’s Lifeboat Anthem ‘Home from the Sea’ will be played to mark the occasion.

The newly built centre will see production, maintenance and refit of the charity’s all-weather lifeboat fleet performed in-house and under one roof for the first time in the charity’s 191-year history.

RNLI Head of Construction and Refit Angus Watson added: ‘We are very proud to be officially opening The All-Weather Lifeboat Centre. It is an impressive facility which will allow the charity to build six Shannon-class lifeboats a year and maintain our other all-weather boats. Having a state of the art facility which will see the charity produce, maintain and refit all-weather lifeboats in-house and under one roof is a first for the charity.’

The building itself includes the following features : 3 spray booths used to apply primer, coats of paint and antifoul to the lifeboats, Moveable platforms which will improve ergonomics and efficiency for accessing fit-out and refit lifeboats and a visitors centre allowing members of the public to watch the charity’s lifeboats being built. In addition to this PV panels on the roof of the ALC combined with the PV provision on the rest of the RNLI campus means that up to 8% of the RNLI’s energy requirements can be provided by the sun.

This is the second time a crew member from the Arranmore RNLI has represented Ireland at a major lifeboat event. In 2005 Arranmore RNLI crew member Nora Flanagan was invited to the launch of the Volunteer Spirit. The lifeboat Volunteer Spirit was built with funding from sales of badges throughout the Ireland and the UK and served on the relief fleet.