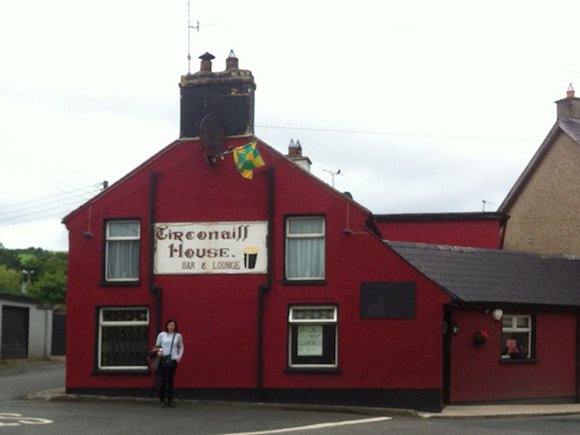 A Donegal family were told to put a match to their pub in Raphoe because it was in such a bad state of repair.
But the McGranaghans, who owned the Tirconaill House, had no such plans.
Instead they returned from America, from where their dad Hugh had emigrated and refurbished the bar to its former glory.
Here Michelle McGranaghan Poban tells how they refused to give up on their Irish heritage and rebuilt the bar and houses which meant so much to them.

“When we were searching for advice to help us decide what to do with my father’s property in Raphoe, County Donegal, we were told by respected family friends: “Put a match to it all.

“My father, Hugh McGranaghan, passed away four years ago. He had a pub called the Tirconaill House and five small rundown houses around it. He left them to m and my siblings. The pub and house were all deserted and needed a lot of work.

“But they were important. My father had ben born in a small apartment above the Tirconaill House along with his two brothers and sister, and his mother ran the pub and worked behind the bar well into her 90s.

“My grandmother was an inspiration to us. Not too many women could own and run a bar business and raise a family in the early 1900s. As a child, I remember my grandfather as a quiet, gentle man who looked after the cattle on the farm. My granny was a tough businesswoman who worked behind the bar. She needed to be in order to handle the cattlemen after a day at the market. She would scold them for tracking mud through the bar. But then she would put on a big pot of stew and feed them dinner before they headed home

“Although sh was stern, the patrons seemed to have the utmost respect for her. Some patterns feel that her spirit still haunts the bar today.

“When my dad immigrated to the US, he followed in his family’s tradition and bought and ran a bar in Elmhurst, NY. He named it the Donegal Pub (Tirconaill in Gaelic). He raised me and my four siblings above the bar.

“I’ll never forget the way the patrons of the bar viewed my father and how rewarding the business was. It was the bar where “Good friends meet,” and remained so for 40 years, until the Donegal Pub doors were closed for good after a terrible fire in 2000.

“My father was a proud Irishman and both he and my mother instilled their love of their cultural heritage into their five children. Growing up we spent many of our summers in Ireland. My sister and I took Irish Step-Dancing and my brother played the accordion. My father was also an active member of the Emerald Society and the Donegal Association.

“In the summer of 2001 he took all of us, including our spouses and children, to Ireland. He enjoyed showing off his 8 grandchildren to the town. He rented a mini bus that fit all 18 of us. He drove it and he gave us a tour of the old country (mostly Donegal), and you could tell how passionate he was about his country when he described the beauty and history to us. We had the best time and created a lot of priceless memories that summer.

“So after he passed away in 2011 we couldn’t just abandon the pub in Raphoe. There was no way we were just going to get rid of our family’s legacy without a fight.

“The summer after my father passed my husband and I went over to Raphoe. Returning to Ireland, it was very depressing to see the once lively little corner of the town all deserted and boarded up. Years ago, when the economy was doing well, my father had been offered a million euros for the bar and all his property around it. But my dad didn’t have the heart to let it go because it meant so much to him. But by that point we could barely give it away. Besides, how could have sold something that was so near and dear to our father’s heart?

“With a lot of elbow grease my husband and I washed, scrubbed and painted one of the houses. Then we staged it a bit with all the furniture we found in all the other houses and added a few personal touches. A few months later it was rented.

“This motivated us to fix up another house. At this time my cousin (on my mother’s side) and her husband had lost their jobs so we hired them to fix up the remaining 3 houses and the bar. With the help of my aunt, some local handymen, plumbers and electricians we were able to rent two more houses and open the Tirconaill Pub. (Let’s just say we are Raphoe Hardware’s BEST customers.)

“It’s been far from easy. My brother, Mick, took over most of the responsibility and he spends endless hours taking care of paper work and managing business matters overseas.

“But today, three of the houses are being rented and the Tirconaill Pub is open for business. By no means do we think we will make money, but we do know we made a difference! We brought life back into a small deserted town. Most importantly, we know we made our father and grandparents proud by keeping up the McGranaghan family legacy!

“Although Dad’s spirit is with us and guiding us all the time, it is most prominent when we are in Raphoe. The townspeople go out of their way to tell us stories about him and tell us what an amazing man our father was. It’s an incredible feeling to have others rave about him. It’s just a reminder how blessed we were to have had him as our father!

“Hopefully, this legacy will continue for future McGranaghans to come!”

This article first appeared on www.irishcentral.com”