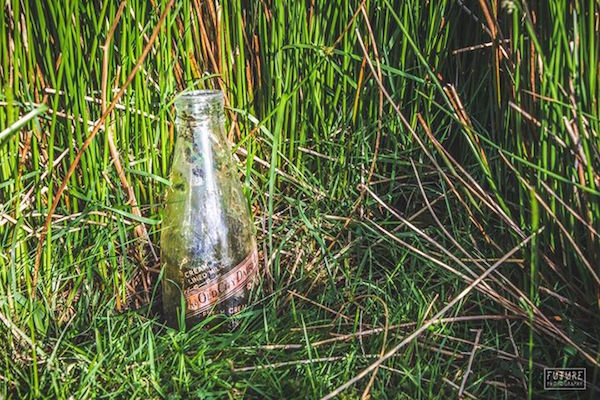 The 1920s milk bottle….it’s still in a ditch near Dunree

AN intact piece of North West history has been found in a Donegal ditch.

A 90-year-old milk bottle had been left among the reeds near Dunree in Inishowen sometime in the 1920s. And it was still there.

And when photographer Scott McClintock stumbled upon it, he was amazed it had survived the test of time.

“I trekked up the side of a mountain somewhere in Dunree to get a few shots of the beautiful surroundings,” said Scott.

“On my travels towards the top I stumbled across an old glass milk bottle that had been sat upright in amongst the reeds.

“It caught my eye and it looked interesting enough to make me want to get down and read the print.

“It was at that point that I noticed it came from Derry and it belonged to a company or farm called “The Old City Dairy Ltd” and it looked quite old, but it was still intact.

Scott discovered this particular bottle had a 3 year run under the name “The Old City Dairy Ltd” before becoming “City Dairy”.


On the face, in brown lettering is “Cream Lined Milk”, below that in a band is “The Old City Dairy Ltd”, fresh cream daily, telephone no.264357/8 Derry.

“I have noticed that people collect and sell these bottles as they are quite rare, but at the time I just left it in its original location as it made me wonder how long it has been sitting there before I seen it,” added Scott.