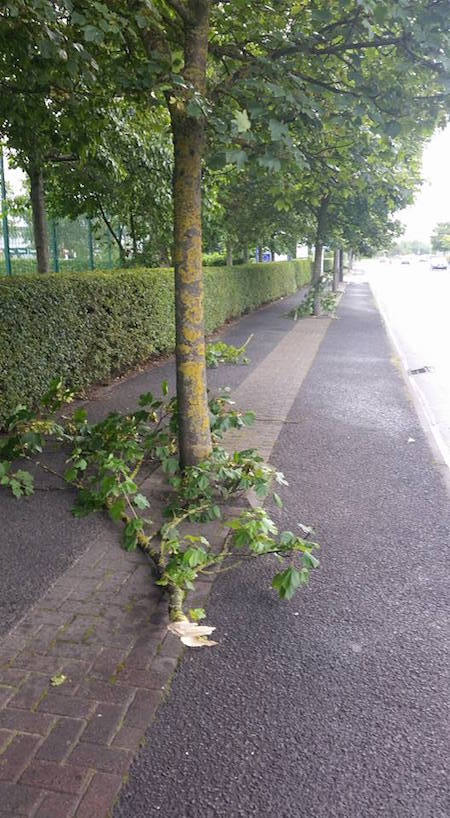 MAYOR SAYS THOSE WHO ATTACKED TREES SHOULD BE FLOGGED WITH BRANCHES

The vandalised trees at Port Road in Letterkenny this morning.

The Mayor of Letterkenny, Cllr Gerry McMonagle has reacted with fury after vandals attacked mature trees on the main road into the town.

The vandals tore a number of branches from mature trees at Port Road overnight.

The route is a popular one with walkers and the council have spent years developing and tending to the trees.

Cllr McMonagle said those who attacked the trees were nothing more than “senseless morons.”

He has also said flogging those responsible for wrecking the trees with the very branches hat they ripped off would not be a bad idea.

“I can’t tell you how infuriated and angry I am. These people are nothing better than senseless morons.

“The Tidy Towns committee have spent years trying to develop these tress so they give a good impression on the way into our town.

“And overnight the idiots come along and try to undo all that good work.

“People might think I’m reacting a little bit strongly here but I would go as far as to say that these people should be flogged with the branches that they ripped from those beautiful trees,” he said.

And he warned that those responsible for the act of wanton vandalism will hopefully still face the courts.

He revealed “This particular area is well-covered by the town’s CCTV system and I will be trying my best to ensure that whoever did this is identified.

“We will work with the Gardai in trying to identify these people and hopefully bring them before the courts.”