SIGHTINGS OF HUMMINGBIRDS ACROSS DONEGAL IS THE WORK OF ‘IMPOSTERS’! 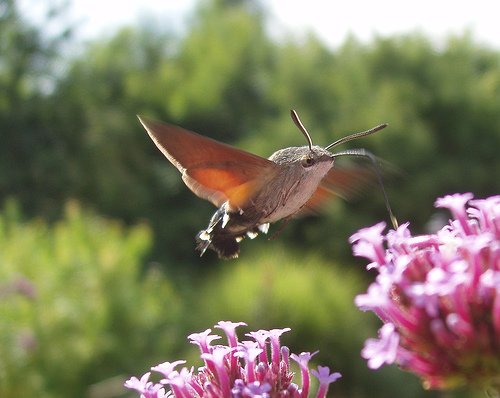 A hummingbird hawkmoth which has ben spotted across Inishowen.

Sightings of rare hummingbirds across Donegal have been dismissed by Birdwatch Ireland as the work of imposters!

Recent sightings of the tiny nectar-loving birds have been made across Inishowen.

But excited members of the public have had their encounters dashed.

Birdwatch Ireland say the hummingbirds are actually large moths which mimic the birds.

Their wings beat at an incredible 70 – 80 beats per second, which allows them to ‘hover’ in the same way real hummingbirds do.

Niall Hatch of Birdwatch Ireland confirmed they have received the reports but said there is no way hummingbirds can be Ireland.

“They originate from the Americas but they need to constantly eat and there is no way they would be able to fly all the way to Ireland without eating for such a long time,” he said.

Niall said he understands why many members of the public have mistaken the Hummingbird Hawkmoth for the tiny bird.

“They are masters of mimicry and even have a humming sound like a hummingbird when they are on the wing. It even appears like they have a beak when they are feeding on nectar.

“They are unusual and people don’t see them very often so I can understand why they get excited but they are definitely not hummingbirds,” he said.

Co Donegal woman Rosemarie McLaughlin was amazed when she cam across what she thought was a hummingbird in an enclosed garden in Carndonagh recently.

The ‘bird’ was feeding on lavender and other plants and Rosemarie even managed to take a video of it in flight.

She sent the video to her brother who had awaited all his life to see one of the rare birds.

“I was so excited when I seen it that I sent it to my brother who has waited all his life to see one,” she said.

Unfortunately Rosemarie and anyone else who has spotted a ‘hummingbird’ in Ireland this summer will have to travel a long distance to see the real thing.

SIGHTINGS OF HUMMINGBIRDS ACROSS DONEGAL IS THE WORK OF ‘IMPOSTERS’! was last modified: September 10th, 2015 by Stephen Maguire
Facebook0Tweet0LinkedIn0Print0
Tags:
Birdwatch Irelanddonegalhummingbird hawkmothInishowen