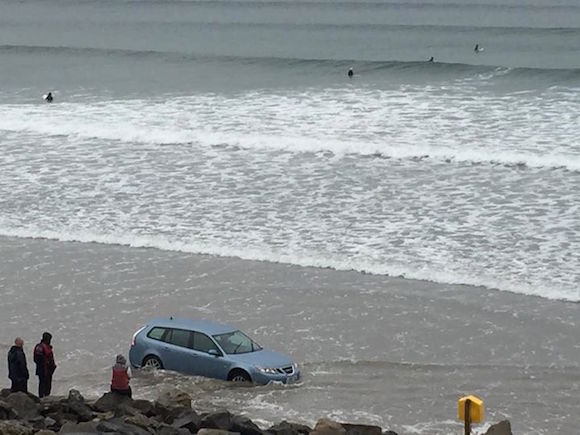 The car is caught short by the incoming tide on Rossnowlagh Beach. Pic by Surfers Bar.

Another driver is caught by the incoming tide at Rossnowlagh beach.

Last month it was an ice-cream van and before that it was another family car.

The latest incident at the popular coastline resort saw an overseas visitor left stranded as the tide turned quickly.

It’s understood the car could not be moved as it became stuck in the soft sand.

Although many locals are aware of the dangers of the beach, many visitors are not.

The owner of this SAAB car eventually recovered the car but a considerable amount of water damage was done to the vehicle.

Perhaps it’s time the council considered erecting even bigger signs warning motorists of the dangers of driving onto the beach.