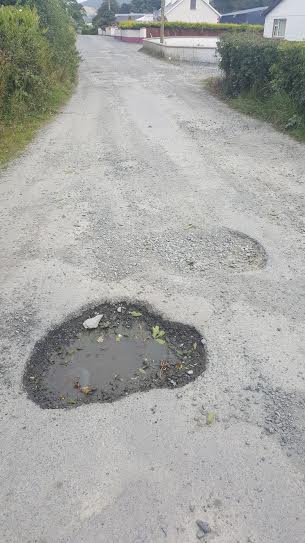 POT-HOLES AND BUMPS ON ROADS CAUSE ANGER IN EAST DONEGAL

RESIDENTS in east Donegal say they are being driven potty – literally – over pot-hole riddled roads….and the lack of money to fix them.

Our picture shows the state of a public road at Drumatoland, St Johnston, but it could be anywhere in the east of the county.

Sinn Fèin Councillor for the Stranorlar Electoral Area, Gary Doherty, says all councillors have highlighted what they feel to be a disparity in roads funding which is causing a serious deterioration in road standards.

Speaking today Cllr Doherty said: “It is painfully clear at this stage that road conditioning in the Stranorlar Municipal District is the worst in County Donegal.  This has been acknowledged by political representatives from all parties.  It is one issue we are united on. It is now time for central Government to listen to our concerns and take measures to alleviate the huge problem we have with our roads.

“In July, the Department of Transport, Tourism and Sport allocated an additional €1.6 Million to Donegal County Council for Road Restoration Improvement.  Only €225,000 of this additional monies went to the Stranorlar District.  That paltry sum does not come close to fixing the problems we have.

“The Finn and Lagan Valley areas are unique in County Donegal as they are the most intensively farmed in the County, resulting in industrial scale agriculture. We have 56% of the County’s total cattle herd, harvest more crops than the other areas and have the largest farms in Donegal. It stands to reason that our roads are under more pressure due to the volume and scale of the vehicles using them.

“However, as roads funding is currently allocated on a miles-per-area ratio rather than using the existing visual conditiioning survey, we are not receiving the level of funding we need.  We now require the Department to take note of our plight and take immediate action to alleviate this crisis.”

SEND us your pot-hole pix to info@donegaldaily.com.

POT-HOLES AND BUMPS ON ROADS CAUSE ANGER IN EAST DONEGAL was last modified: September 15th, 2015 by John2