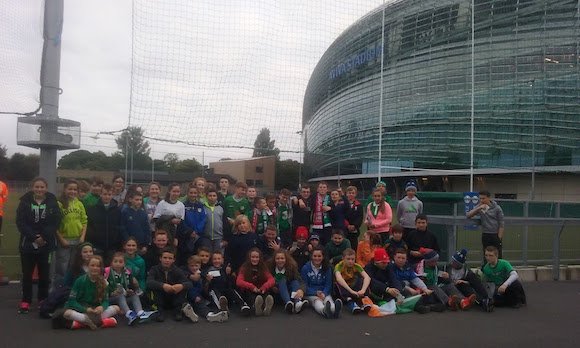 The first year students of Crana College with their teachers at the Aviva Stadium.

First year students of Crana College along with members of staff headed to the Republic of Ireland versus Georgia game at the Aviva Stadium.

Other students were never at a real live soccer game before and the vast majority had never been to the Aviva Stadium before. It was going to be a day to remember for everyone.

“We arrived at the Aviva in plenty of time to get to our seats and enjoy the big match. Most of the die-hard supporters fretted, fumed, whinged and moaned about the Irish performance until John Walters scored, the whole stadium erupted when the ball hit the back of the Georgian net. The noise was deafening and our faith in the ‘Boys in Green’ was restored. Now we had another problem, how do we hold on to the 1 – 0 score line until the final whistle.

“It was nail biting those last 20 minutes at the Aviva praying that Georgia would not score and hoping that Germany would do us a real big favour and beat Scotland. They really obliged big time winning 3 – 2 and we sang their praises at full time.

“We rounded up the troops at 10pm and headed for the busses, arriving at Crana College at 2am to meet up with parents. A job very well done, another great trip to the Aviva had come to an end.

“Many thanks to Mr Casey, Mr McMullan, Mr Monagle, Mr Ward, Ms Gallagher and Ms C Bradley who organised and accompanied our 1st years on the trip. A great day was had by all.”

‘Youthreach was one of the best decisions...

US visitor crosses the Atlantic to celebrate...