PROTEST: An Anti-water charges meeting will be held by Right2change tonight in Letterkenny. 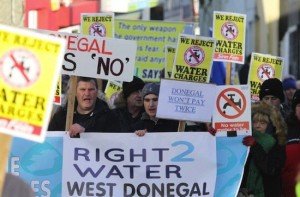 This Follows the Right2Water demonstration on 29th August 2015, which saw over 80,000 people from countrywide take to the streets of Dublin to demand the abolition of water charges.

Trade Unions affiliated to the
campaign announced they will be organizing ‘town hall’ meetings in
every county under the banner Right2Change.

The Donegal Right2Water/Right2Change public meeting will take place in
the Radisson Hotel, Letterkenny on Wednesday 23rd of September at
7.30pm.

This will be a presentation and discussion, open to all, on the policy principles developed at Right2Water Trade Unions Conference which was held earlier this year.

A sizable number of submissions for the Policy document were received including those from political parties, Trade Unions, community groups and individuals.

Secretary of Right2Water Donegal, Philip McFadden said Right2Water has developed into much more than a protest calling about the abolition of water charges.

It has become a rallying call to all anti-Austerity groups to highlight issues from cuts to Lone Parent Benefit, to the homelessness crisis, lack of adequate funding to hospitals and schools, and in Donegal, the threatened closure of the ‘red eye’ NowDoc service.”

He said, ”Water charges have proven a tipping point for the hundreds of thousands of citizens who marched at the very first protest in October 2014 culminating in the latest massive protest on 29th of August this year.

“It is clear that the ‘economic recovery’ that is being trumpeted by Government is not a people’s recovery.

“Politics is about ‘choice’ and the wrong choices have been made”.

”We believe that a fair recovery and an equal society are possible, and that cronyism and greed can be replaced by fairness and hope.

“Major changes to how politics is conducted must take place”.

”We want to start a debate about the future– about what type of country and society we want to live in, about Equality and the type of recovery we want”.

”Irish society is faced with huge decisions and we need an honest discussion, which galvanized the Trade Unions affiliated to Right2Water to launch a public consultation process on the Principles that should underpin a future progressive government”.

”That process culminated in a conference in June where policies were amended and adopted to address a range of areas from housing, jobs, decent work, to democratic reform.

“The principles are based on the concepts of democracy, equality and justice, simple yet
radical concepts which should inform the policy choices made by those we elect to govern.

”They also represent a fundamental changein the way in which we view our economy and our society but they aresimply the starting point which is why the upcoming Right2Changemeeting at the Radisson Hotel will be a continuation of the Consultation process.

”Right2Water unions will not be standing candidates however they will be asking that all progressive political parties, independents, community groups, and individuals unite around policies that aim to create a better and fairer Ireland.

”Please attend this meeting, contribute to this important Document and
have your say on the issues that concern you.

“Change won’t happen on its own. Join this debate on how we, the citizens, can change our
country for the better”.