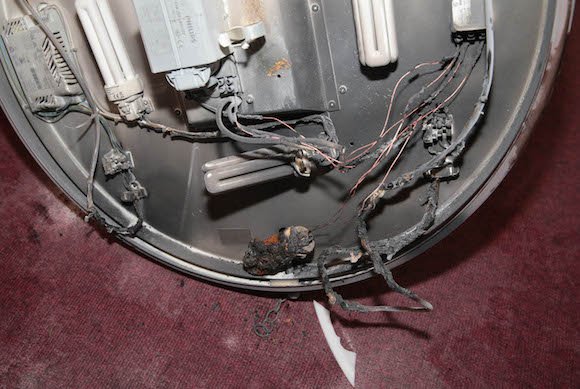 The large light which exploded into flames at St Columba’s Church in Termon.

A priest has thanked all those who managed to get a church open again after a fire broke out during 10am mass. 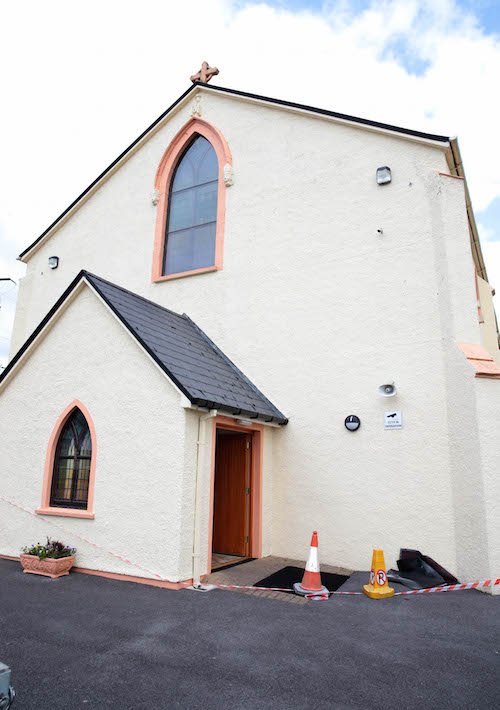 The entrance to the church is cordoned off after the fire.

Around 25 parishioners were forced to flee St Columba’s Church in Termon during 10am mass yesterday after a bulb exploded and a fire broke out.

People were sent spluttering and coughing from the church as toxic fumes are send into the air.

But the church was open again after some trojan work by professionals and locals alike.

Fr Pat McHugh, who was saying mass when the drama happened, today thanked both professional tradesmen, the fire service and also many locals who had help in any way to get the church open again.

Fr McHugh also revealed that a full inspection of all he lights will be undertaken immediately to ensure they are all safe.

The well-known and highly respected priest recalled the drama which visited his church on Saturday morning.

“I was saying the mass when all of a sudden there was a large bang, an
explosion which was louder than a shotgun.

“Then suddenly the bulb caught fire and smoke started to come from the
wiring. The light fell down and there was a large crash with debris
going everywhere. Everything happened very quickly – with the space of
less than a minute or two.”

The quick-thinking priest then rushed to put the fire out but several
people were left afforded by the fumes.

“We went and got a fire extinguisher and sprayed it on the fire which
was in the centre aisle in the middle of the church.
“We put out the fire but there was a lot of smoke and what appeared to
be toxic fumes.
“I told everyone to get out quickly. People wre very calm and they all
filed out but a lot of them were coughing and spluttering.
“Nobody was injured and sure that’s the main thing,” revealed the priest.