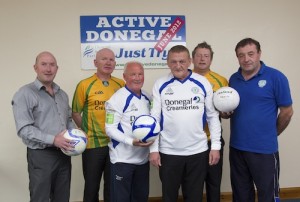 Our men’s team drew 2-2 with Convoy Arsenal on Sunday. Scorers were Mark Hunter and Chris Toner. They are joint top of the league with Gweedore Utd and we are home to Gweedore Utd this Sunday at 2.00pm. Our u/16’s continued their winning ways with a 1-0 win away to Ballybofey Utd. Jack Parke scored. Our u/14’s lost 5-1 after extra time to Fintown Harps in the League cup semi final. Enda Gallagher was the scorer. Our u/14’s beat Fintown Harps 2-1 in a dramatic league cup semi-final. Dean rodgers had put us ahead but with the game tied at 1-1, Jordan Mc Hugh headed home a winner in the final minutes. Our u/9 boys and girls side took part in the Mc Donalds finals in Abbottstown on Saturday. They played five games against teams from round the country winning three, drawing one and losing one. The kids played brilliantly on the day and their behaviour was excellent. Thanks to all who helped on the day. Thanks also to the organisers and all who attended our quiz in The Grianain hotel on Thursday night, which helped raise some badly needed funds. Congratulations and best wishes to the Manor Scouts who officially opened their new headqaurters on Saturday. Well done to Zoe Green on being selected on the Irish squad for the European qualifiers. Zoe has been an outstanding performer for the club over the past few years. In our weekly lotto the numbers drawn were 4,8,9 and 14. Hugh Gorman, Kilmacrennan, had three numbers and won e50. Next weeks jackpot is now E5875.