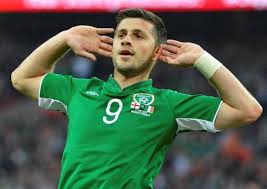 IRELAND have rocked World Champions Germany – to seal at least a play-off spot for next year’s European Championships.

Playing without injured Seamus Coleman – and with Shay Given forced off at 40 minutes with a knee injury – Martin O’Neill’s warriors caused a sensation at the Aviva by winning 1-0.

Shane Long smashed home an astonishing winner in the 70th minute on a night when today’s heroes battled like Jack Charlton’s heroes of two and a half decades ago….closing own every ball, chasing the German players around the pitch like men possessed.

Sub goalie Darren Randolph pumped a long kick-out and Long ran on to the ball with it all to do.

But do it he did.

He pushed the ball in front of him before smashing what turned out to be the winner into the top right hand corner of the net.

The Aviva erupted in celebration.

Randolf pulled off a wonderful save shortly afterwards as Ireland held on and held on – Walters was incredible – to seal an incredible victory.

Scotland and Poland drew 2-2 in Glasgow, leaving us cert for a play-off at least.

If we win in Poland on Sunday, we’re through to France – though a 2-2 draw or 3-3 draw would also get everyone dusting off the passports for the Continent next summer.

Donegal Daily’s Mark Forker told us from the Aviva: “I’ve never seen anything like that tonight. It was incredible, just incredible.

“The boys played out of their skins and the party will go on long into the night.”