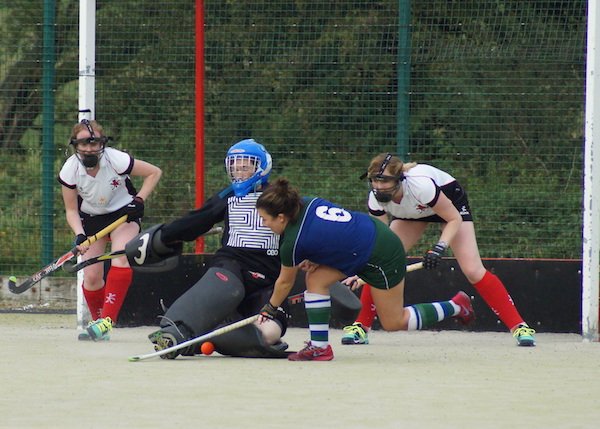 Action from the Raphoe and Grosvenor game yesterday.

Raphoe Ladies 1st XI continue their undefeated record in Senior 1 hosting Grosvenor at the Royal and Prior School, Raphoe on Saturday 10th October. Both Raphoe and Grosvenor are newly promoted teams into Senior 1 and this was set to be a highly competitive match up.

Raphoe set out to exert their dominance from the initial whistle however this was not to transpire. The first 20 minutes seen Raphoe working hard to gain control and composure. Grosvenor applied pressure from the outset, pushing Raphoe into their own half, making it difficult to move the ball out wide and up to their own front line. With Raphoe on the back foot coach Richard Tinney needed to motivate his players to settle into the match and start to play the hockey he knew they were capable of.

The tides started to turn with Raphoe’s defense tackling well and stopping the threat of the opposition. 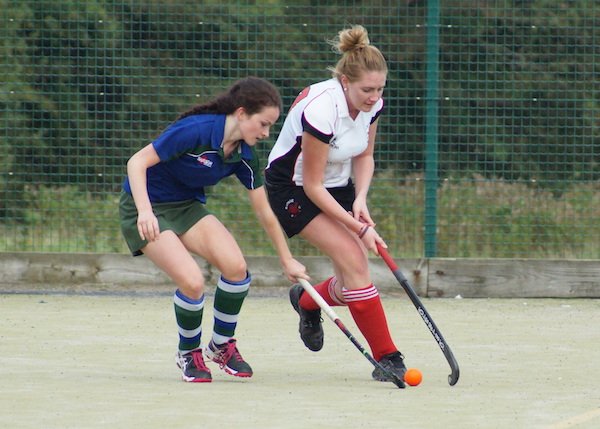 Deadlock was broken about 25 minutes into the first half. The initial goal fell to Raphoe after a period of consistent passing and movement. Rachel Buchanan broke down play in the Grosvenor defence and with a flying run she whipped a pass in from the right hand side to the waiting stick of Sarah Patterson. Patterson calmly slotted the ball into the left corner of the opposition goal. Raphoe continued to press their counterparts with the Grosvenor goal keeper making some excellent saves. Leanne Patterson and Wendy Patterson were unlucky on various occasions not to extend their lead.

Half time was beckoning and the defensive line of Louise Moran, Victoria Wray, Lyndsey Tinney and Arlyne Kilpatrick were holding strong and keeping a watchful eye on the attacking players, making tackles and breaking down dangerous play. With the break only minutes away Grosvenor won a controversial short corner with V Wray receiving a green card with 2 minutes in the Sin bin awarded for descent. The resulting short corner was well broken down, only for the umpire to award a second short corner for a “supposed” back stick by W Patterson much to the disgust of the supporters, who deemed the tackle fair. The second short corner seen the Raphoe defense pulled in all directions, resulting in the ball being tapped in at the back post. Raphoe needed to gain their composure once more and the half time whistle was a welcome time out to gather momentum once more. 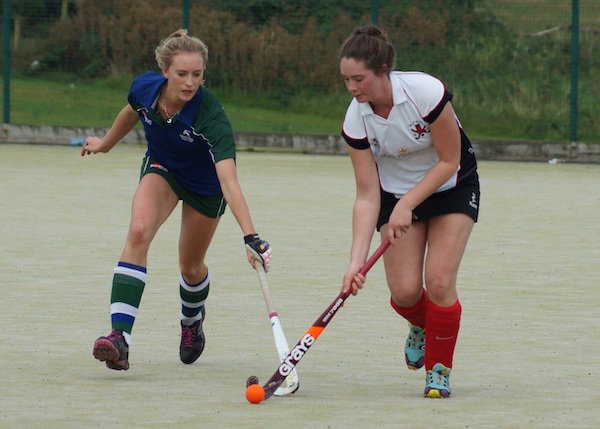 Raphoe made a positive start to the second half. Possession and passing was their key to success and the aim of their game. With the opposition under consistent pressure it was only a matter of time before a second Raphoe goal came. 16 minutes into the second half S Patterson found herself at the goal mouth once more. She took her shot and while it was on target it was going to hit fellow player Sabrina Barnett. Barnett used her wealth of experience and with excellent control took the ball down and slid
it into the left-hand corner of the goal. The supporters’ voices raised once more in support and encouragement. The Raphoe midfield worked tirelessly and their superior fitness was telling. Shannon Porter’s dogged determination assisted in breaking down play and putting Raphoe back on the attack. Kimberly Porter was slotted through and found herself staring the Grosvenor keeper in the eye. Unfortunately for Porter the ball continued to run leaving her with a tight angled shot that the keeper saved well.

The third goal came when Arlyne Kilpatrick glanced up and seen a free Lyndsey Tinney in the centre of the pitch. L Tinney seen the galloping run of Rachel Buchanan and with pin point precision Buchanan found the incoming stick of Esther Hume. Hume rammed home the third and final goal of the game.

Raphoe did not have the second half all their own way. Grosvenor threatened, however Raphoe were up to the challenge. On one occasion, Grosvenor broke free behind the Raphoe defence only to be met by keeper Denise McElhinney. McElhinney made things difficult however they pulled off their shot and it looked like it was going in but for the heroic, last-ditch clearance of the line from Sarah Boal.

Raphoe held their composure and when the final whistle sounded the win was secured and their unbeaten record intact.

Player of the match was awarded to Victoria Wray for her impressive defensive display.

Elsewhere, Raphoe Ladies 2nd XI played Derg Valley 2nd XI away in Castlederg. Kirsty McKinney scored Raphoes only goal from a well executed short corner, bringing the sides in at 1 each at half time. The second half started off strongly for Raphoe, however with a weakened defence, Derg hit home with 2 goals and the game ended in a 3-1 defeat for Raphoe. Some excellent spells from the Raphoe Ladies, in what proves to be a promising team in the coming months.

Next week, Raphoe 1st face Rainey away in what promises to be another competitive match up whilst our 2nd XI travel to play Coleraine 2nd XI in Junior 6.