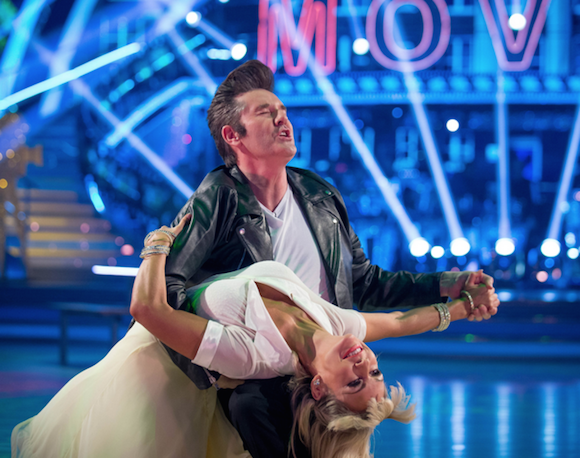 Daniel (with the quiff!) and partner Kristina

The Donegal man appeared with an amazing quiff hairstyle when he took on the role of Danny Zuko from Grease to dance the Cha Cha.

But the 53 year old has revealed how not all the hair was his own!

“Everybody was talking about it and it did look great but it took a lot of time to get it right.

“But I have to admit I got a little hand and not all of it was mine. It’s at home now drying on the radiator before it goes back to its real owner,” laughed the star.

Daniel revealed that he was a little bit giddy going into last Saturday night’s show and that may have cost him marks from the judges.

“I was a bit giddy with all f the dressing up and I think I skipped into the routine instead of taking my tim and getting the steps right.

“But it’s hard to remember everything. I looked back at the show and I saw a hand and it took me a while to raise it was actually my hand,” said Daniel.

The singer says that despite all his preparation, he still cannot get himself ready for when one of his fellow dancers is voted off.

“That is the hardest part and it’s not getting any easier. You are working with these people all week and suddenly they are being voted off.

“It’s just a real downer and I have to say I am finding that really difficulty. I don’t think it’s going to get any easier either because we all know how much work we are putting it this show,” he said.

Daniel said he doesn’t care about the judge’s votes but is just hoping for the day when they tell him that he is improving.

“They told me there’s a dancer lurking inside of me and I hope he comes out soon,” he added.