DONEGAL STUDENT CHEF IS COOKING WITH THE BIG BOYS! 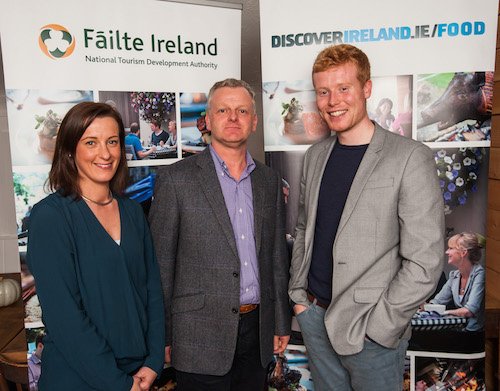 Chef in training at Letterkenny Institute of Technology, Adrian McCarthy, was selected by Fáilte Ireland to attend Food on the Edge – a two day symposium for chefs & food enthusiasts – which takes place this week in Galway City.

Adrian is currently studying Culinary Arts and is one of eight students selected from the Institute of Technologies around the country to attend Food on the Edge and hear how some of Ireland’s top chefs view the ‘Future of Food’.

Organised by Fáilte Ireland Food Champion and Galway native, JP McMahon, The Food on the Edge symposium aims to challenge our perspective on food and our connection to it. Attendees will hear from approximately 40 speakers on the topic ‘Future of Food’ at the event, each of them chosen for their innovation, passion and influence on today’s food culture.

As part of the initiative, and on the fringe of the event, Fáilte Ireland organised an intimate workshop with Mark Moriarty, one of the up and coming culinary figures of the Irish food sector. During the workshop Mark shared his culinary story, discussed his future plans and offered advice to the group of trainee chefs.

“I was delighted to work with Fáilte Ireland on this workshop and meet with some of the future chefs of Ireland. As a young chef myself, I was be able to offer some advice on how to maximise the opportunities each college course presents. Perhaps some may realise their own ability to achieve on a national and international level and become part of the next generation, pushing the boundaries of Irish food”

Food is integral to the overall tourism experience. A significant proportion of a visitors time on holiday will be spent experiencing food in some way – either consuming it in local dining or hospitality establishments, visiting specialist shops and markets or having a hand on learning experience in a cookery school. As a consequence the experience the visitors have of food will play a pivotal part in determining their satisfaction with their overall holiday. Of total spend by visitors; approximately 35% is spent on food and drink which equates to close to €2bn per annum.

“Ireland is having a food movement, the current levels of activity relating to food, and the interest around local and traditional food practices and traditions, shows that there is much happening and much to be proud of. It is imperative that Irelands new wave of inspired chefs are included as part of this important movement.

“We are delighted to provide Ireland’s next generation of chefs and food innovators the chance to listen, talk and engage with key influencers from around the world. Indeed, Mark Moriarty as San Pellegrino’s World’s Best Young Chef 2015 is a prime example of the heights that can be achieved as young chef in Ireland. Never before has there been a more exciting time to become a culinary professional – and the routes to training are widely available.”