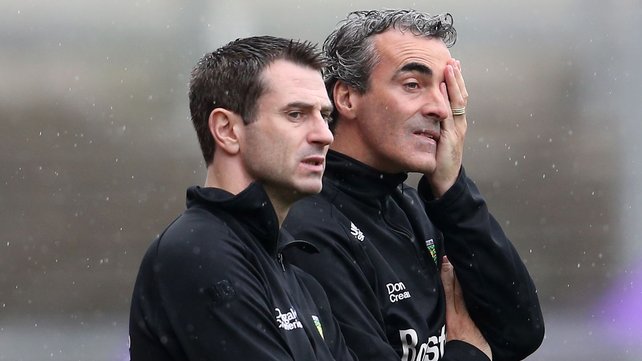 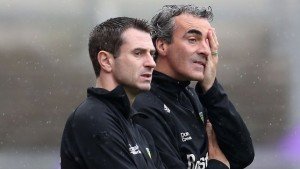 BREAKING NEWS: DONEGAL manager Rory Gallagher has issued a statement hitting out at Jim McGuinness over what he says is a breach of trust by the Glenties man.

Gallagher says he is ‘disappointed’ by former county boss Jim McGuinness revealing details of the former’s departure from the management team in 2013.

Gallagher was assistant manager to McGuinness from 2011 to 2013.

McGuinness has been promoting his book ‘Until Victory Always’ – signings of his book in Letterkenny at the weekend led to long queues.

“It was one of those things; it was a break-up. It’s a relationship and we had fantastic times and unbelievable experiences together. But these things happen in sport and in life,” McGuinness said of Gallagher leaving the Donegal camp after the defeat to Mayo in the All Ireland quarter-final of 2013.

But current boss Rory has broken his silence and has McGuinness of a breach of a trust in speaking about his departure and claiming that there are “inaccuracies in the book” that the Donegal County Board did not believe.

In a statement Rory said: “I have received many requests for my reaction to the description given by Jim McGuinness in his book with regard to my departure from the Donegal Senior Management Team in September 2013.

“At this point, I am not interested in commenting on the inaccuracies in the book while involved with the Donegal Senior Team. I am comfortable in the knowledge that Donegal County Board officers are aware of the true circumstances of my departure.

“Following my departure I did not comment on the matter as this would have been unfair on the players and the new management team whose focus was on the year ahead. I am really looking forward to the new season working with a brilliant squad of players who have given Donegal so much over the last five years.

“The management, players and the County Board will be doing everything in our power to achieve success again for Donegal in 2016.”