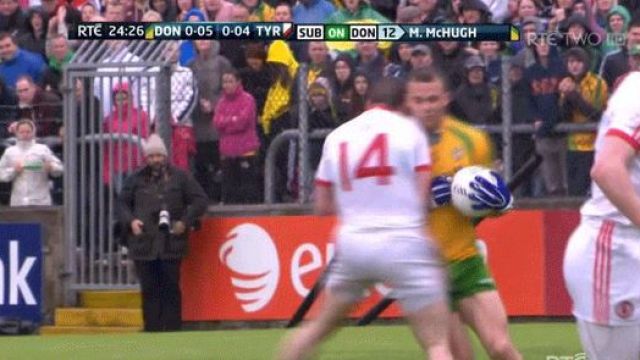 Jim McGuinness has said the memory of Neil McGee’s famous collision with Tyrone talisman Stephen O’Neill will live long in his memory.

Donegal were reigning All-Ireland champions when Tyrone rolled into town in May 2013.

O’Neill lined up McGee with a shoulder as the powerful Gaoth Dobhair defender carried the ball out of defence.

However, when O’Neill hit McGee he simply crumbled – and was left lying in a heap on the Mac Cumhaill Park playing surface.

For McGuinness – all the history between Tyrone and Donegal could be distilled in that moment.

In his memoir ‘Until Victory Always’ McGuinness recalls, “If there is one moment in that game that I will carry with me for the rest of my life, it will be the collision between Stephen O’Neill and Neil McGee.

“To me, all the history between Tyrone and Donegal could be distilled in that moment – and it was where we took control of the dynamic.

“Stephen had initiated the contact: he had lined up Neil as if to say, right – I’m going to have a good go at this boy now.

“And he put his foot down and led with his shoulder and then he just kind of crumbled against McGee in a way that made everybody recoil.

“And this wasn’t just an ordinary footballer. This was Stephen O’Neill – Tyrone talisman.

“Neil hardly seemed to notice – he drove on with the ball.

“You could feel the impact in the stadium and people were shocked. I tracked O’Neill for a few seconds and he done well to keep jogging – but then he stop and he was hunched over.

“I felt he would have given everything in the world just to keep jogging through the pain – but he had to bow to it – everything changed at that moment.

MCGUINNESS – ‘I’LL CARRY MEMORY OF MCGEE COLLISION WITH O’NEILL FOR AS LONG AS I LIVE’ was last modified: November 4th, 2015 by Stephen Maguire
Facebook0Tweet0LinkedIn0Print0
Tags:
GAAnewsSport