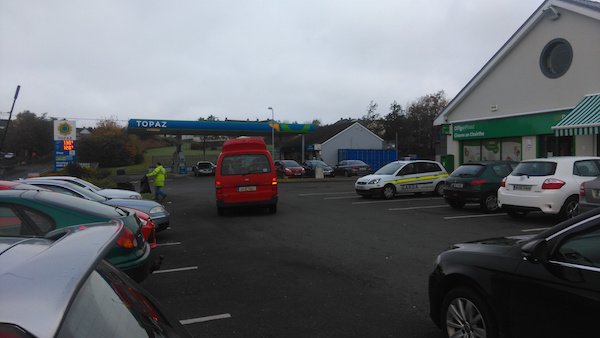 Gardai at the scene of the raid of the petrol station at Glencar in Letterkenny earlier this week.

A MAN has appeared in court charged in connection with a hold-up at a petrol filling station in Letterkenny earlier this week.

Dean Kelly, from 92 Glenwood in Letterkenny, appeared before a sitting of Ballyshannon District Court this morning.

The 23-year-old was charged with robbery at Glencar Service Station in the town earlier this week.

On Monday evening two men, one of whom appeared armed, burst into the premises around 9.50pm, threatened staff and made off with hundreds of euro from the cash register.

Staff were left shaken after the incident, though no-one was physically hurt.

Kelly, accused of stealing more than €1k, was released on his own bail to appear at Letterkenny District Court next week.

The court heard Kelly was charged with the offence at Letterkenny Garda Station yesterday.

Meanwhile, in a separate matter, gardai are continuing to warn the public about distraction thieves operating in the county after a robbery in Falcarragh yesterday.