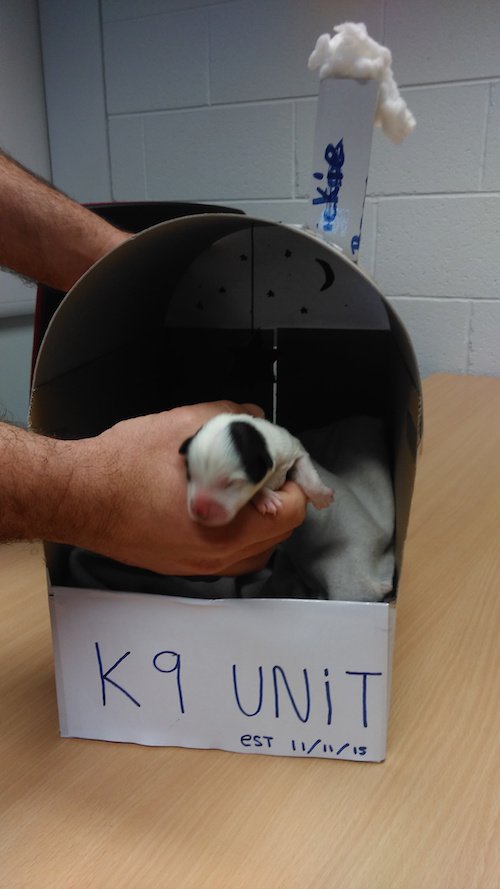 ‘Starsky’ in his new Garda K9 unit which was built by Gardai in Letterkenny.

Big-hearted Gardai came to the rescue of a tiny pup and even built it its own ‘K-9 Unit.’

The tiny 10 day old pup was handed into Letterkenny Garda station in the early hours of this morning.

The Collie-cross pup, which has been named Starsky, was found after a member of the public heard a whimper in a hedge near Ard O’Donnell in Letterkenny. 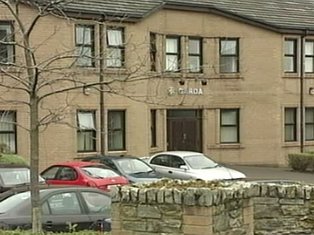 The man brought the tiny pup to the local Garda station who wondered exactly what they were going to do with the little pup.

But the cops went the extra mile when they built the abandoned pup its own K-9 Unit complete with warm blanket and even a chimney and star hanging from its roof!

Staff at the station kept the little pup alive by feeding it warm milk through syringe before contacting local ISPCA inspector Kevin McGinley early this morning.

Inspector McGinley paid tribute to the humane treatment shown by the local Gardai and staff at Letterkenny Garda station.

“They didn’t only look after the little pup, they went the extra mile and showed so much compassion. It was such a lovely gesture.

“As well as building the little unit out of a box, they put him in  blanket to keep him alive and even put in a warm plastic bottle of water to keep him warm.

“I have to say in all my years working with the ISPCA, this is one of the most heart-warming gestures I have ever come across,” he said.

Starsky has now been taken to a local vet where it will be fed by syringe for the coming weeks.

Inspector McGinley has now issued an appeal to any dog owners who may be missing a pup to contact them on 1850 515 515.

“The mother could have left the dog for a while and went looking for food or it could have simply been abandoned. If anyone is missing a pup in the Ard O’Donnell are of Letterkenny then they should get in touch immediately and we will reunite the pup with its mother,” said Inspector McGinley.