PLENTY OF BABES AT THE BALOR’S PANTO! 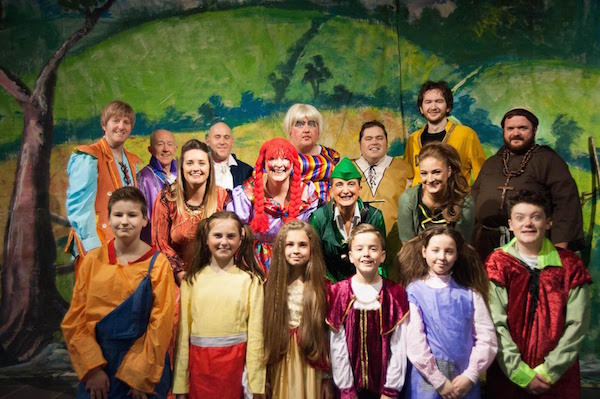 The cast of the panto.

IT’S that time of year once again – oh yes it is!

This year’s Christmas Panto at the Balor Theatre, Ballybofey, ‘Babes in the Wood’, is in the throes of final rehearsals ahead of the big opening night this Saturday, November 28.

It’s all go at the Balor with almost 100 people involved in the costume making, set making and painting as well as finishing touches to the dancing and singing.

Many ‘old’ and new faces in the chorus this year, and new talent emerging in the main cast including Dean Gillespie, Majella Sweeney and Eugene McGee.

The marathon run starts tomorrow and will run nightly from 8 pm, to Friday December 11.
Directed by JC Bonar, the panto will be staged by the award-winning Butt Drama Circle.

In a journey where good prevails evil, the wicked Prince John plans to have his absent brother King Richard’s children kidnapped and killed, so that he can claim the throne for himself.

To this end he enlists the greedy Sheriff of Nottingham to do his dirty work for him and he in turn employs two idiot baddies, Riff and Raff. This turns out to be his mistake and the Babe’s good fortune. The Sheriff also has an idiot son who dreams of being a famous footballer, but ends up joining Robin Hood’s gang instead. Will faithful Nurse Neuralgia and the gang, who is aided by Robin Hood and his Merry Men (well two of them anyway) save the Babes?

So come along with all the family and have a great night.

For further information and bookings, telephone 074 91 31840 or log on to www.balortheatre.com

PLENTY OF BABES AT THE BALOR’S PANTO! was last modified: November 24th, 2015 by Stephen Maguire
FacebookTweetLinkedInPrint
Tags:
Babes In The WoodBALOR THEATREdonegalpants