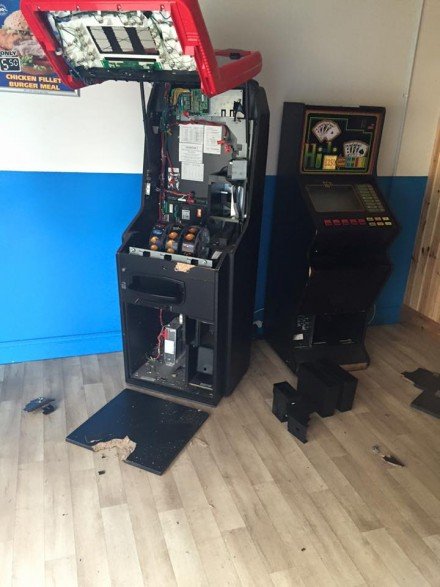 Finn Harps star Matthew Crossan has been left devastated following yet another robbery at one of his takeaway outlets in St Johnston.

Crossan owns a successful chain of Matt’s Takeaways in the border towns of St Johnston and Killea.

However, both shops have been broken into several times over the past number of years – causing extensive damage in the process.

Only last month, prior to Finn Harps first-leg play-off with Limerick – Crossan’s shop in St Johnston was targeted by thieves who smashed windows in the premises and ransacked slots machines.

Unfortunately, the nightmare has repeated itself, Crossan discovered another break-in again in the same outlet this morning.

Locals are saying enough is enough – and are calling on Gardaí to nail the culprits before they strike again.

A devastated Crossan made an emotive appeal for information on his Facebook timeline.

He’s asking anyone who observed anything suspicious in the area around the time of the attacks to come forward with any information.

Matt said, “St Johnston shop has been broke into again last night – so if anybody seen anyone acting suspicious in the area – then please let me know ASAP – as someone had to see something. Thanks.

Disgusted friends and teammates of the popular businessman vented their fury underneath his status.

David Shovlin wrote, “This is a joke pal, something needs to be done about this. ”

Janet’s Hair Salon posted, “Disgusting human beings, there day will come, so sorry to hear about this again Matt. ”

Dylan Kildea wrote, “You think they’d go and get jobs, instead of stealing the vermin c***s.

Dwayne Scanlon said, “Close it and open in a new town buddy – them scumbags won’t travel – but your customers will.