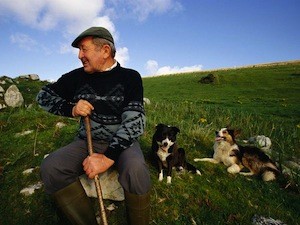 As the dust settles on the IFA meeting in Letterkenny on Saturday night a former livestock chairman and treasurer for Donegal has joined calls for the county executive to resign, the Tirconaill Tribune reports today.

John Gibbons who farms at Woodland has has been a leading figure in the IFA in Donegal for over thirty years told the Tribune boss John McAteer: “IFA is no longer speaking for the farming community in Donegal and we’ve been badly let down by our own executive committees in recent years.

“They’ve supported the demands of the national executive and we are the big losers. That is one of the main reasons we need a complete clean out at local level if this great farm lobby is to win back the confidence of the members and if it is to have any real clout into the future.”

He’s now joined with others in calling on the County Executive to step down immediately.

“Smaller farmers on low incomes in Donegal have been deserted by the IFA. Issues which have simply not been dealt with by them includes the rebuilding of disadvantaged area payments, farm assist payments and beef prices,” he said.

He said in recent years there has been an unacceptable culture of total support in Donegal IFA for backing everything the national executive does and that sort of ‘feather bedding’ support has been a factor in the present catastrophe.

John Gibbons who is a member of the Letterkenny Branch, a former County Treasurer and National Livestock representative said he failed to have a letter read to his own branch AGM last Friday night without any reason given. The letter was then read to the emergency meeting on Saturday night.

“But that only happened after it was initially refused and it took a huge amount of hassle to allow the contents to be read to the meeting. I was away on business and as a result I asked another man to bring my letter to the meeting in the Clanree Hotel and the stone walling he encountered was shocking and totally unacceptable. Where is there any transparency in that kind of behaviour?” asked Mr. Gibbons.

He continued: “I will remain a very staunch IFA man because we do need a very strong farm lobby group that will represent the wellbeing of their ordinary members and forget about corporate earning and companies that have no relevance to the needs of the farming community.

“I have had the great pleasure of serving on committees with men like Major Chance, John Witherow, John Starritt, Robert Kee and Robert Carey. They delivered for Donegal and the county executive in recent years would not be fit to lace the boots of these men.

“They are only there to prop up the national executive and nobody has been allowed to offer any criticism of the top brass in Dublin. When they venture up to Donegal they are given a blanket of protection and we need strong men and strong views on our own county executive… sadly we’ve not had that in the last number of years,” said Mr. Gibbons.

John McDaid of the Ramelton Branch said that Michael Chance and his committee should not have needed a vote of confidence on Saturday night. “They should have resigned as part of the entire clean out needed in order to restore confidence in rebuilding the organisation from the ground up.

“The Donegal leadership voted full confidence in the IFA as huge concerns arose nationally and if that is representing the members in Donegal, then I fear for the future of the farm lobby as having no real clout for the future,” he added.

Meanwhile, Paul McDaid, Chairman of the Ramelton Branch said that he was totally disillusioned with the meeting on Saturday night.

Claiming it was a waste of time passing any resolutions calling for the resignation of the national executive he said: “That meeting in Letterkenny came a week too late for any resolutions be considered at national level on December 21st. Every member knows that all resolutions must be with head office at least 21 days before these meetings and the Letterkenny motions were much too late.”

Saying he was also considering resigning from IFA, Mr. McDaid says it is apparent even to younger members like himself that the organisation is not working for the members in Donegal: it is not transparent and in his opinion it is fully backed up by the county executives and that has got to stop.

“Our own AGM almost saw the canonisation of Pat Smith Smith and it was shocking to hear a top county official praise Pat Smith to the rafters.

“We heard a top IFA man praise Pat Smith to the high heavens and he was close to being canonised. We were told Smith was only motivated by the needs of the membership and money was of no interest to him at all.

“We all know this was rubbish and it is very hard to have any confidence in the leadership in Donegal given their fullest support and backing for Pat Smith and also Eddie Downey.

“This county lost as much as €25 million in the new CAP deal and we never heard a word of criticism from our own county executive.

That is why there is so much confusion and doubt as to who we should listen to at the moment,” added Paul McDaid.

A more lengthy and extensive view on this story is in today’s Tirconaill Tribune.