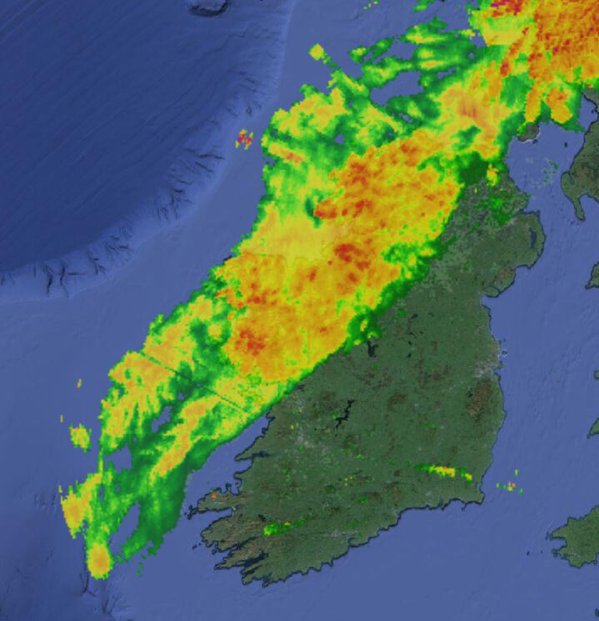 THERE have been power cuts and reports of flooding on roads across Co Donegal this evening as Storm Desmond hit land shortly after darkness fell.

There are power cuts in Laghey, Downings and Carndonagh.

ESB Networks says more power cuts are likely throughout the night – with winds of up t0 140k/hr set to hit the county in the early hours of the morning.

Torrential rain will continue in Donegal until 3am on Sunday when the Status Red rainfall Alert will be lifted.

The National Co-ordination Group for Weather Emergencies has met and locally contingency plans have been put in place by Donegal County Council, the Coast Guard and Gardai.

Our satellite image – taken at 5pm – shows the extent of the rainfall hitting Ireland.

In the past few minutes Donegal County Council has issued a third statement warning people living in areas which are likely to flood to take immediate steps to protect themselves.

“We are appealing to members of the public to take special care when outdoors over the next 36 hours and is advising essential travel only,” said a spokeswoman.

“In areas prone to flooding, the Council is asking all property owners to take all necessary precautions and to consider appropriate contingency measures for the expected duration of this severe weather event.

“The Council is continually monitoring conditions and will respond to emergency call outs as required.”