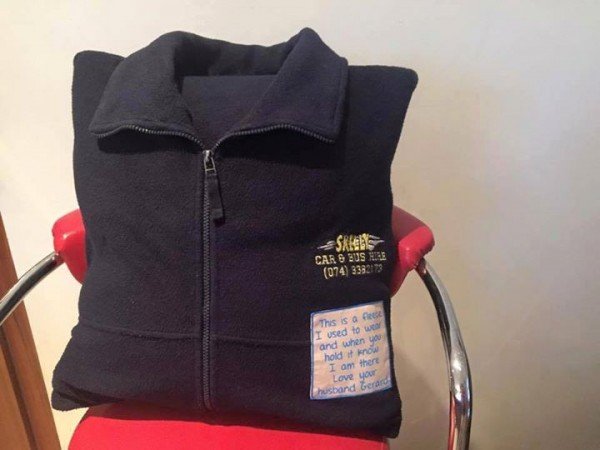 This was the touching present Leanne Kearney gave her mother to remember her late father this Christmas.

A Donegal girl’s heart-warming present to her mother in memory of her late father has gone viral online!

Gerard Kearney, 54, passed away a few years ago after losing his battle with cancer.

Christmas can be a very difficult time of year – for those who have recently lost loved ones.

However, Gerard’s daughter Leanne decided to make a cushion for her mother made out of the fleece her Dad wore to work everyday.

Gerard was a proud employee of Skelly Car and Bus Hire in Moville – and worked for the company for years, before his untimely passing.

Leanne decided to get a cushion made out of his fleece and felt it would be the perfect gift for her mother to remind her of the good times she had with Gerard.

The beautiful tribute also had the following words embedded on the cushion.

It read, “This is a fleece I used to wear, and when you hold it know I am there, Love your husband Gerard.

The touching gesture went viral online and was covered by popular TV show Ireland AM.

Leanne told Ireland AM, ““I know an old fleece might not mean much to people but this fleece was worn with pride by such an amazing man, representing the company he worked for for so many years!

“Losing someone you love is hard, especially at this time of the year, so I thought I’d make Dad’s fleece into a cushion for my mum to remind her of the good days.

It has worked in the sense that it’s comforting for her to have it and now takes pride of place in our home.

The cushions were made by the fabulous Material Girl Sewing company.